THERE are a few things in life which get my back up: one is the way that fat mook Tony D picks pieces of food out of his fuckin' teeth at the dinner table; secondly, I got no fuckin' time for Mormons – comin' round my house and knockin' on my fuckin' door; and three, I ain't no fan of the Games of the Winter fuckin' Olympiad, if truth be told.

Which kind of explains why I was not filled with excitement regardin' a business trip I took to Salt Lake City a few years back. Someone needed someone to take care of this thing – you know, that thing that Mo-Mo don't want no-one to talk about no more. Anyway, they picks that asshole Tony D and myself to do the job. And if spendin' time with that miserable, piece a shit mook wasn't bad enough, it turns out Salt Lake City is infested with these fuckin' Mormon pricks.

Now, I'm not prejudice against no-one – except fuckin' Arabs, single moms, Polaks and freeloaders on fuckin' welfare – but these Mormons are some piece of work. How many fuckin' wives do you need, you degenerate fuckin' mooks? Anyways, to my further annoyance, it transpires that the Winter Olympics is in full swing when I gets into town. I just don't get all that snow and ice bullshit. If I had my way I'd take the whole thing and bury it in the fuckin' desert.

Day one we takes a look at the ski jumpin'. Most people who was there, was goin' 'oooh' and 'aaah' while these fuckin' mutts go flyin' off the big fuckin' ramp. Speakin' personally, I was prayin' some dumb Polak fuck would land on his stupid fuckin' head with a big 'whack', you know what I mean? He won't be flyin' too high when he's hooked up to some fuckin' iron lung and shit. Then we drops in on this ice rink place. I'm thinkin' maybe we can see some hockey, but all we gets is one homo after another skatin' around the joint like Greenwich Village fairy boys.

The next day we goes back to the rink: Still no fuckin' hockey, so we pitches up and watches these broads playin' this stupid fuckin' game where they scrub the ice with a stick while this big fuckin' stone slides down to the end. There's this prick in front who keeps gettin' up every time the stone stops in the big circle. Now I'm not one to ask nicely, so I jabs him in the back of the neck with a screwdriver and tell him if gets up again I'll take one of them big fuckin' stones and drop it on his fuckin' head. Whadya know, he don't get up no more.

Anyways, the English broads – weird lookin' dames with real big feet – won the gold medal cause they got more stones in the circle than the fuckin' Canucks or French or whatever. To celebrate I balled this Dutch speed skater chick and bitch-slapped her boyfriend when he walked in halfway through, the degenerate fuckin' mook.

As told to Matt fuckin' Owen 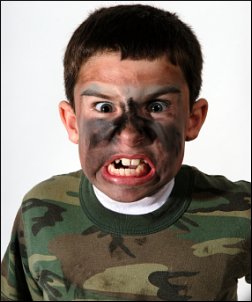 CLIMATE change will transform the south east of England into a steaming jungle filled with giant snakes and marauding tribes of blood-thirsty cannibals, scientists have predicted.

Researchers at the Institute for Studies have warned that unless carbon emissions are reduced Essex and Kent will resemble the darkest reaches of Amazonia, probably in about 18 months time.

Professor Henry Brubaker said: "First will come the mosquitos. They will be huge, about the size of a crow. Then the giant snakes will arrive to feast on the mosquitos.

"Within months towns including Colchester, Ashford, Gravesend, and possibly even Braintree, will be little more than mangrove swamps. However, local rail services should be unaffected."

He added: "Before long the populations will be reduced to primal savagery. Unable to grow crops on the dark jungle floor they will raid each others settlements with the victors feasting upon the flesh of the vanquished.

"The strongest tribes, driven on by their insatiable lust for human flash, will soon descend upon the slow, fat people of Hampshire."

Meanwhile doctors are warning that fewer old people will die as a result of rising temperatures.

He added: "If you feel that your local community is being overrun, then it might be an idea to nudge one of them under a bus."