INDIANA Jones, the eminent archaeologist, has condemned the Chinese as a 'gang of no-good scumbags' claiming they tried to poison him in a Shanghai nightclub.

Dr Jones said he had agreed to work with a group of Chinese businessmen to recover the ashes of Nurhachi, a Ming Dynasty emperor, in exchange for an undisclosed six figure sum.

Launching a compensation claim, he accused former business partner Lao She of breach of contract and acting like 'the worst kind of thug'.

Dr Jones said: "I arrived at Lao She's nightclub, on time and smartly dressed, expecting to be paid in full for, what I felt, was a job well done.

"I enjoyed a glass of champagne but declined the offer of caviar as I have been having a bit of acid reflux recently.

"Anyway, it quickly became clear that he had no intention of paying me and had instead decided to poison me. I know this because, for some reason, he told me.

"I have to admit, if I was going to poison someone I wouldn't then tell them I had done it and bring a bottle of the antidote with me – but that's beside the point.

"After a really, really painful 20 minute struggle I was able to escape with my young assistant and an annoying blonde woman with fantastic tits."

Dr Jones said he and his companions were then forced to flee to Northern India where he spent several days involved in a series of incredibly painful fights with an army of turban wearing madmen.

He added: "If anyone knows what 'kalimar' means, can they please write to my office?" 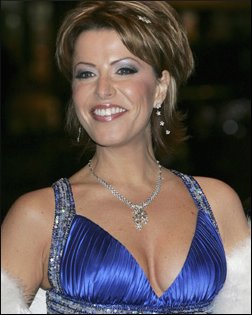 NATASHA Kaplinsky will start each bulletin by staring straight into the camera and slowly sucking on her pencil as the new £1 million-a-year face of Five News.

Station bosses have asked the newsreader to end each item by flicking her tongue around her lips, arching her back, and then cupping her breasts in her hands and moving them alternately up and down.

Kaplinsky said: "I was not sure at the outset it was such a good idea, and I am really not interested in the £1 million, but in the end I thought I would just do it anyway."

The glamorous newsreader will present the bulletin in nipple tassles from inside a giant champagne glass, or with her legs astride a chair while wearing just a diamante thong.

She said: "I really prefer a more formal style and I am not at all interested in the £1 million but when they asked me I thought it was probably best not to make a fuss."

The former BBC anchor also revealed she was uneasy when she learned Five bosses wanted to rename the bulletin Five News with Natasha Kaplinsky – Imagine Your Cock in Her Mouth.

"It was not my idea and I do feel a bit nervous about it. Nor am I really that bothered about the £1 million, but in the end I felt I should be professional about it," she added.

Kaplinsky will deliver upbeat items by shouting them out as she is fired across the studio from a canon while wearing a Wonder Woman suit.

If she has to deliver sad news involving dead children or injured pets, two researchers will stand either side of her and gently pull down the corners of her mouth.