One Woman's Week: Taking A Stand

I am thoroughly disgusted with the utter filth who bring children into this world and then send them to school to be educated by decent people like me.

One of my pupil's parents has put in a complaint about me. And while Mrs Dixon, the head teacher, didn't name names- I know exactly what little traitor it was that shopped me. It was a runty, sickly squib of a girl called Yasmeena Ali Ahmed Something. And before you think this sounds fishy- the issue is not because she's an ethnic. Two of my top six pupils have dark skins so this is not about me being a racist.

Yasmeena joined my class of P2s a month into the first term and, to be honest, she has never recovered from this crucial blow back or, indeed, felt like a real member of my tight-knit team.
Plus, she can't even fucking read. The special needs tutor says that she has 'dyslexia' but I believe that is just one of those faddy mental illnesses people and artists claim to have when they are just stupid and lazy.

Every day, as I am giving my meticulously planned orations to the class, she is staring into space and fiddling with herself, no doubt thinking about 'text-speak' or Sonic 'The Hedgehog'. Some say you should pace your classes by the ability of its weakest member. Conversely, I say: "If you can't hack the heat, jump out the bandwagon!"

So, I had given the class a word jigsaw to piece together and Yasmeena just wasn't as quick to find the right bits as the other children (like per usual). She started whining and banging on about how 'she wanted to do some of it'. And when she was repeatedly beaten to it by the others, she started pulling Oliver Templeton-Lauder's beautiful golden hair (and he is one of my top three).

Well, I was furious and dealt with it by fighting fire with fire. She needed to know the pain she had caused poor Ollie. This is the only way that children learn properly and besides- there was, like, three (five at the most) measly strands which came out. It's not like I hit her- it was a do or die moment: Ollie might have been seriously hurt.

And now that heartless bitch has humiliated me in front of Mrs Dixon and may even cost me my job. I intend to rack up the tempo of my lessons even further to put that little tramp back in her place. Maybe, when she leaves school at 15, pregnant and with eight failed standard grades, she and her grovelling parents will regret the day they took on Ms Fenessey. 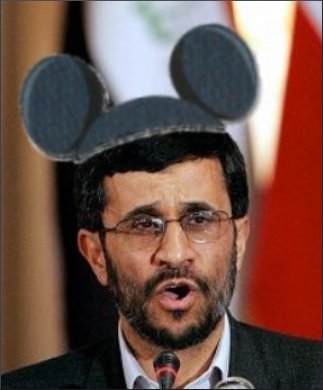 IRAN has abandoned theocracy and signed a four year deal with Disney after two hours of talks with the US Government yesterday.

In a goodwill gesture designed to cement relations with the entertainment giant, Iran's President  has agreed to change his name to Mahmood Ahmedisneyjad.

Hassem Kazami, Iran’s chief negotiator, said: "We had some anger issues about the West and ourselves that we needed to deal with before we could grow as people and a nation.

"We were always flying into rages about silly little things and repressing each other. That was just so not the place where we needed to be right now in our lives."

He added: "The Americans explained that their version of secular democracy meant slightly less flag burning, stoning and firing guns in the air, which, to be honest, does get a bit samey.

"Then they told us about TK Maxx, Ben and Jerry's, Grey's Anatomy and someone called Kirsten Dunst. Nice. Where do we sign?"

Jackson P. Emmit, Disney’s Vice-President for Iran, said early projects would include a "Pirates of the Straits of Hormuz" theme park and Blindfold This! a musical comedy based on the 1979 hostage crisis, starring Queen Latifa and Matthew Broderick.

US envoy Ryan Croker said: "As usual, we tested our arguments with the elders of the Free Church of Scotland. Obviously we got nowhere with them but of course the Iranians are much less extreme."