SIR IAN BOTHAM in his local post office, asking how much it would cost to send a two-litre bottle of sarsaparilla to North Korea.

BOB HOLNESS dressed as a made-up superhero called CiderMan, throwing hundreds of apples against the side of an abandoned hospital in Chiswick.

BETTY BOO in central London, with head bowed, wearing a sandwich board that read ‘All the Dentists Are Dead Now’.

KEITH VAZ brandishing a large orange magnet taped to a snooker cue, which he was using to try and beckon the sun from out of the sky.

LENNY HENRY stopping passers-by in Watford and offering to carry their bags for them.

CHRISTINE BLEAKLEY pushing a stalled train along the track just outside Bournemouth, while growling ‘Come on big guy, you can make it’. 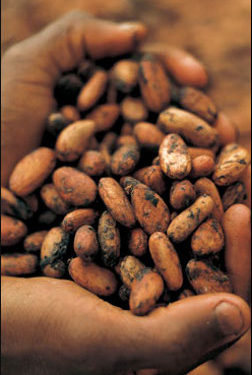 Hollis, from Grantham, purchased around seven percent of the world’s chocolate last week after Stephen Malley confirmed that although he loved her, he wasn’t in love with her.

“But my self-control gave out and before I knew it I was in a meeting with the board of Cadbury and posing as the chief executive of Borrison’s, a fictitious supermarket chain that will soon be opening stores across the Midlands and East Anglia.”

But now she intends to increase her cocoa holdings, drive up the price and sell at the top of the market before using the money to build a giant bomb that kills self-centred arseholes.

Tom Logan, chief economist at Donnelly-McPartlin, said: “Price hikes like this can cause instability for low volume producers in the developing world. Let’s just hope she doesn’t find out that Stephen and Emma have been at it since March.”

Paul Mansa, a Ghanian cocoa farmer, said: “My wife blames Stephen entirely. However Nikki seems like an annoying, self-absorbed cow so I can understand Stephen’s position.

“Plus, that Emma is into all kinds of weird shit.”