UK RESIDENTS are to be reclassified as snails, in a bid to avoid the jurisdiction of the European Court of Human Rights.

The removal of British people from the species Homo sapiens is part of a government plan to extricate the country from certain aspects of the European Union.

Home Secretary Theresa May said: Species is a pretty subjective thing, and to be honest ‘slow-moving with a slimy sheen’ seems to describe most of the people one sees in the supermarket.

“If UK citizens are ostensibly gastropods, the Court of Human Rights cant have a say.  And if they put together a Court of Snail Rights well just make everyone a sparrow.

Iain Duncan Smith supports the policy: There will be immense savings in the welfare system.  As everyone knows, snails carry little houses around on their backs, so are ineligible for Housing Benefit.

He continued: Its also very difficult to tell if a snail is disabled, so almost no one will qualify for disability related benefits, much as with the current system.

Wayne Hayes, a hairdresser from Lowestoft, said: I worry this means I will no longer be able to enjoy salty snacks, such as peanuts, without shrivelling up and dying.

“However I understand that most snails are hermaphrodites and I do like the idea of being able to copulate with myself.” 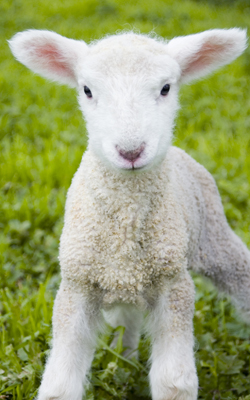 MANY of this year’s lambs are being born jaded.

According to research by the Institute for Studies, 74% of newborn lambs feel ‘unexcited’ about spring.

“Spring? It is what it is. Personally I think the whole thing of having ‘seasons’ is a marketing ploy to get people buying different coats.

“Contrary to popular belief, only one lamb in 20 partakes in skipping or gambolling, and while they do so the other members of the flock suck their teeth in disgust.”

Two-day old lamb Nikki Hollis said: “I’m just a by-product of agriculture, I had an ear tag before I could even walk properly.

“Already people bring their kids to look at me and point. What do they even want? I can’t give these people hope.

“Also, I find the notion of ‘cuteness’ vaguely pornographic.”