How to talk about inflation but not mention Brexit

INFLATION rampant? Exports dropping? Sterling completely f**ked? Here’s how to discuss it without mentioning the red, white and blue elephant in the room.

There’s a war on and Liz Truss is inches away from wearing a khaki tin helmet on BBC Breakfast. The war has affected gas prices. Consequently none of this is anything to do with the B-word and it’s all Russia’s fault, and its many London-based oligarchs who financially supported the Leave campaign. Oh. Shit.

Everyone’s in the same boat

There’s inflation across Europe, which proves it’s not a Britain-specific problem and not because of something Britain, specifically, did. Why, across the whole Eurozone it’s forecast to reach 6.2 per cent this year, while in Britain it’s already nine per cent for reasons we don’t need to go into.

At least everyone can get a job

This isn’t like the bad old days of 1982 when millions were out of work. In fact there are more jobs than there are people to fill them, thanks to a shortage of foreign workers for some inexplicable reason, which means wages are going up and it’s impossible to control inflation. F**king hell.

It’s actually great that the pound’s so weak because it increases exports which reduces inflation. So this will all sort itself out unless some kind of political restriction has been placed on exports to our closest neighbours meaning they can’t go up, increasing inflationary pressure. You know what, let’s move on.

Bloody Bank of England, not raising interest rates massively last year. Why, if they’d increased everyone’s mortgages by six per cent or so then we wouldn’t be in this terrible inflationary mess now. And that’s nothing to do with Britain proudly regaining its sovereignty! Ha! I mean, it’s bollocks, but still. 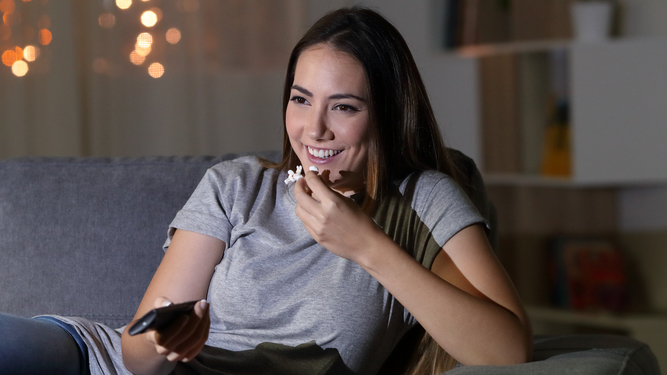 FROM slagging off your partner for watching it to staying up all night to finish the series, these are the stages of getting stupidly invested in a dreadful telly programme.

Taking the piss out of your partner for their viewing choices

You swan into the room after doing some self-improving activity like jogging to find that your partner is watching an episode of Selling Sunset, where tiny bald men and giant Amazonian women sell obscenely expensive houses and bitch about each other. You mock your partner viciously for being so trashy and basic.

Moving from the arm of the sofa to fully sitting down

Ten minutes in and you’ve somehow slid from the arm of the sofa where you’d loftily perched yourself to take the piss into a comfortable sitting position next to your partner. You’re going to get up in a minute, you tell yourself. You just want a moment more of being judgemental about these awful people who have enough money to buy an 8,000 square foot house you desperately wish you owned.

Not letting your partner change the channel

After a couple of episodes your partner mentions there’s something on in a few minutes that you both wanted to watch. Because you’re so invested in finding out whether Chrishell and Jason will get together or not you tell them not to worry about switching over. That’s what catch-up is for after all.

Continuing to watch when your partner goes to bed

At midnight your partner announces they’re going to bed and asks if you’re coming. You say you’ll be up in five minutes, before pausing the show and going to the kitchen to pour yourself another drink and make a nice big plate of cheese and crackers.

Getting to sleep at 4am hating yourself

Okay, so somehow you’re now halfway through the next season and even though you’re knackered and a bit pissed, you need to know whether Christine gets fired or not. And when you find out, it’s a huge anticlimax and you go to bed feeling hollow and somehow cheapened.