SMALL talk is the office go-to for a reason – it avoids you discovering the extent of your colleagues’ awful personalities. Broach these topics at your own risk.

Think you can have a sensible political discussion? Hahahahaha. There’s bound to be someone who can’t focus on an actual issue and just goes ‘I suppose you’d prefer Corbyn?’ as if that’s the last word in any debate. Politics also includes immigration, so avoid unless you like hearing tabloid headlines repeated ad nauseum.

Your heart will sink as you learn your union rep has a theory about the assassination of JFK involving holograms. Meanwhile your manager is convinced Area 51 has captured a ghost in a force field. Remember when you at least had professional respect for these dickheads?

It’s unlikely you’re a massive Bernard Manning fan, so hardly controversial, surely? Not if they butcher your favourite sitcom so that when you watch an episode now, you just hear Jeff going ‘I can’t believe you like that rubbish’. You later discover he hasn’t actually seen it, the twat.

Sounds innocent enough, but anything vegetarian will be viewed with suspicion, as if instead of ‘I might have the vegetarian lasagne’ you’d said ‘Did I tell you I like making bombs?’. With luck your colleagues will just inform you that whatever you’re eating is too filling, not filling enough, too boring, too exotic, too salty or too sweet, or somehow a combination of all of those. Despite the fact they don’t have to eat it.

People in the workplace

Or ‘enemies’. No input required from you as they will deliver an unbroken monologue for 20 minutes about their cow of a department head. Unfortunately you’re now their eternal confidante who for some reason has to pick up the pieces after they start a blazing drunken row at the Christmas party.

It turns out the only thing worse than hearing about how much a co-worker wants to stab another is how much they want to shag them. There’s always too much detail, possibly down to individual sex acts, but what do you expect from a wanker who blabs this sort of stuff to a near-stranger?

As horrendous as all of the above topics are, they’re preferable to doing actual work. So if you’re really bored with work discussions, ask whether they think Apollo 11 was a hoax or how they’d shag Tiffany from marketing – and what they’d eat from the office canteen afterwards.

Not having your own side of the bed, and other unhinged relationship behaviours 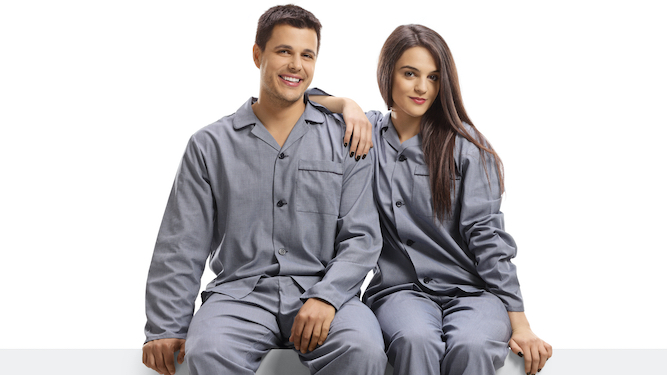 RELATIONSHIPS are largely arguments about chores, not having sex and staying together out of habit. But this out-there shit is the province of true freaks:

Not having a specific side of the bed

These couples might as well sleep atop precipices for how much they live on the f**king edge. How can they rest at night without the security of their own pile of bedside crap? Why add an extra administrative decision to the end of your day? What if you roll the wrong way and fall off?

Witnessing each other shit

Some say true intimacy is familiarising yourself with your partner’s every bodily fluid. But choosing to observe the end process of another human’s digestive function should be reserved for the medical profession. How do you look your lover in the eye when you’ve seen their dumping face?

The hallmark of people whose only personality trait is being in a relationship. Couples who do this are announcing that they have collapsed into each other, creating a single ultra-bland entity. No-one wants a Facebook message from a hive mind.

Kissing the dog more than each other

Why spend all of your life developing a sense of style only to abandon it? There is no good reason for two adults to coordinate like life-size dolls unless they’re entering a contest for most effort wasted on most pointless bullshit. Especially if it’s matching pyjamas on Instagram.