May jacking it in for job at Aldi

BREXIT is such a massive fuck-up that Theresa May is quitting politics for a less stressful life working in Aldi.

After spending several weeks trying to stop MPs fighting over deals that will never exist, May is resigning to retrain as a store assistant at an Aldi in Bracknell.

May said: “As you might have noticed from my constant strained grimace and cack-handed bungling of everything I do, I’m finding Brexit to be a total fucking nightmare.

“Stacking shelves at Aldi doesn’t have the same glamour as being PM, but I think there’ll be more job satisfaction in neatly lining up packets of ‘So Malty’ malt loaf than shafting the UK and being hated by everyone forever.

“I’m also looking forward to being able to relax in the evening, rather than nervously refreshing the BBC News website in case Boris has told the Indian finance minister we’ve got the recipe for curry now.

“And of course I’ll get first dibs on all the treasures in the middle aisle. They’ve got inflatable kayaks this week, you know.”

May’s Aldi supervisor Donna Sheridan said: “Theresa came in this week to start learning the ropes but she put dog food in the toothbrush section. How the fuck do you manage that?” 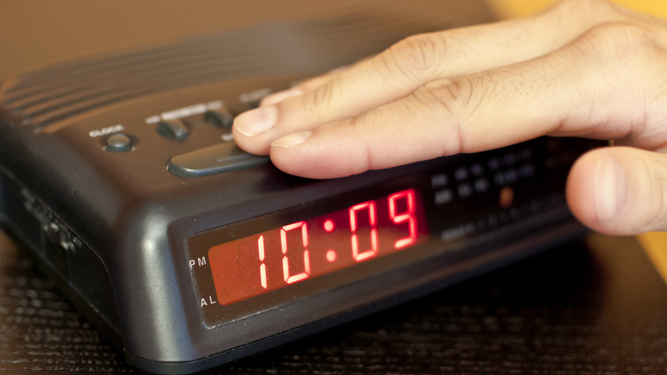 A MAN never just gets up and instead hits snooze on his clock radio until the last possible moment before he has to go to work.

Despite setting the alarm for 7.30am, Tom Logan spends an hour in a fitful sleep interrupted every nine minutes until he absolutely has to get up in a massive panic.

Logan said: “Yes, I do leave getting up until the last minute, but I can be dressed and out of the door in seven minutes if I don’t have a shower and brush my teeth while having a shit.

“I always mean to get up but my bed is too nice. It’s just so snuggly and full of interesting dreams, whereas work is full of nasty angry people. It’s no contest really.”

Girlfriend Nikki Hollis said: “It’s fucking pitiful to watch. By 8.15 I’m having a relaxed coffee and feeling together, but Tom’s having these weird nine-minute sleep sessions to avoid facing reality.

“The stupidest thing is he could just set the alarm later and have an extra hour’s proper sleep, instead of this exhausting, half-awake, half-dreaming state.

“This morning he muttered ‘Watch out for the cybermen’s cheese house, Keira!’. I didn’t go into it.”