Christ On A Bike, Says Britain

THE full extent of the Britain's public debt last night led to a devastating collapse in the nation's face.

As chancellor Alistair Darling read out a series of enormous and terrifying numbers, people across the country, who until now had assumed it was not their problem, curled up into a ball and let out a faint, pathetic squeak.

As Mr Hobbs stared into the bottomless chasm which had opened up beneath his feet, his wife Jane pulled her knees up to her chin and rocked back and forth while whispering: "Cold… so cold."

In what will, surely to God, be his last Budget Mr Darling confirmed that Britain was now essentially insolvent and that the best idea might be to ease the country quietly into the middle of the Indian Ocean and leave it unlocked so that it could be stolen by Somalian pirates.

He added: "We then act all surprised and bung in a claim to the Norwich Union. But everyone has to keep shtum."

Mr Darling said the alternative was to gradually wind the country down over the next three weeks and then go our separate ways.

If taxpayers decide to close the country, Mr Darling said £2 billion would be made available to train Britain's under 25s in how to switch everything off and cover it with a tarpaulin. 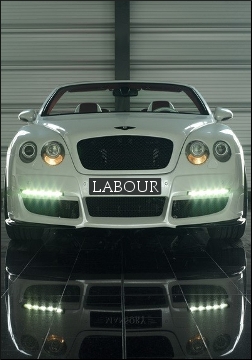 As Mr Darling outlined his strategy to present the incoming Conservative government with an Olympic-sized swimming pool filled with shit, tax accountants were locked in an intense debate over whether or not to go for the soft-top version.

Tom Booker, an accountant from London, said: "It's got a 'bluetooth' and something called 'multi-zone climate control'. Amazing. And look at all that leather. There must be at least nine cows in there."

Following the chancellor's announcement the government of the Cayman Islands unveiled its plan to reclaim more than 20 square miles of the Caribbean Sea to construct the dozens of new buildings that will contain the tiny offices of thousands of shell companies set up by British tax accountants.

Bill McKay, deputy director of the Tate Modern, said: "None of it makes sense. Not a single word. It was a very brave thing to do."

He added: "The growth forecast for 2011 is an avant-garde masterpiece. It's as if the budget has been written by Salvador Dali during a particularly hallucinogenic bout of tropical fever."

Julian Cook, chief economist at Madeley Finnegan, said: "I especially like the bit about wiping out the £1.4 trillion deficit by increasing tax for all domestic cats who earn more than £10,000 a year.

"We're really just talking about those cats that appear in television adverts and there can't be more than four of them."