JEREMY Corbyn has confirmed the Labour Party is to be dismantled, greased and put into storage.

Following his re-election, the Labour leader told members that continuing to run a party without any chance of achieving government was wasteful, expensive and bad for the environment, so it would be put away until a more optimistic electoral outcome could be achieved.

He said: “This isn’t the end of the Labour party. But right now, with Brexit, the privatisation of the NHS and the collapse of our support in Scotland, the Labour party – and, indeed, Britain – is not a great place to be.

“So the party, including MPs, employees and key supporters, will be covered in grease and packed away until at least 2025 in the hope that by then the UK will be ready to vote for a restoration of its 1970s glory days.”

He added: “Do not mourn for us for we are not dead. We are merely sleeping until you have need of us again.

“Good luck with all that stuff, by the way. I hope it goes well.” 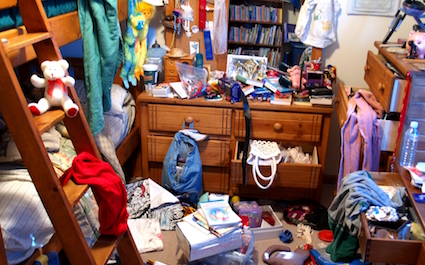 A HOUSEHOLD that describes itself as ‘bohemian’ just needs to tidy up and push the hoover round, guests have agreed.

Ceramic artist Susan Traherne tells anyone who enters the house that the family lives a bohemian lifestyle, which appears to mean that cereal bowls sit on piles of books for days without being washed up.

Friend Tom Booker said: “Bohemian means arty, eclectic, unconventional and apparently drifts of dog hair in every corner and a toilet tank without a lid on.

“I hate to sound like some kind of square, but is dusting really so incompatible with the creative temperament? Does being a free-thinker necessarily mean dirty paint-pots next to the kitchen sink for six months at a stretch?

“It is possible to smoke spliffs and also empty the ashtray. I know, I’ve seen it done.”

Nine-year-old Isiah Traherne says: “My mum says we’re a bohemian household, so it doesn’t matter if the cat litter tray is always full of mummified turds because I’m allowed to do drawing.

“When she’s out my sister and me have this game where we pretend to live somewhere nice.”