Dimwitted Mediocrities 'Not Above The Law'

DIMWITS and mediocrities too stupid to get a proper job are not above the law, according to a legal expert.

Professor Henry Brubaker, of the Institute for Studies, said that while the Bill of Rights protects the mediocrities when they want to say something particularly moronic, it also makes clear that in the eyes of the law they remain the same old talentless no-marks unless and until they are able to marry a member of the Royal Family.

He added: "When one of these non-entities is handed a job for life simply because they turned up to enough meetings, they can often be tempted into believing they are in any way special.

"An everyday illustration of this is their continued insistence that they could command a much higher salary in another line of work, despite the comprehensive and overwhelming nature of the evidence.

"And so while the British constitution affords them certain inalienable privileges such as cheap train tickets, two vibrating chair-filled residences and a nice place to have lunch by the Thames, it does not grant them the supernatural ability to somehow shed their above-average, soul-destroying dreariness."

He added: "Simply believing yourself to be a bit fancy is no longer regarded as a robust defence strategy. Indeed, the precise legal term for such a manoeuvre is 'bullshit chancers doing their usual'.

"Nevertheless, the mediocrities will still employ expensive lawyers to concoct spurious arguments as to why they can only be scrutinised by a committee of fellow mediocrities who, for whatever reason, turned out not be not quite as cretinous as they are."

In the wake of the mediocrity privilege row, Tory leader David Cameron accused prime minister Gordon Brown of going out of his way to help three Labour MPs do something 'disgusting', possibly in his basement.

But a Downing Street spokesman dismissed the attack, adding: "'Fwah, fwah, fwah, pass the kedgeree mummy' – that's totally what he's like, isn't it?"

Meanwhile experts at the Royal Observatory at Greenwich warned that as of 2pm there remained approximately 7.5 million seconds until the general election. 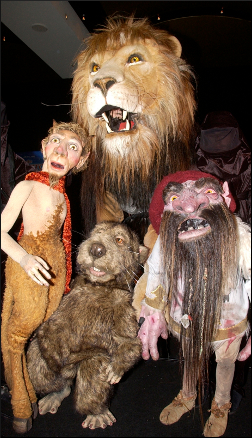 FABIO Capello was in buoyant mood last night after England were drawn against the mythical land of Narnia in the 2012 European qualifiers.

The national coach said he was 'quietly confident' after drawing the snow-covered, wardrobe-based nation, as well as Vatican City, an unmanned sea fort off the Hebrides, The Land Of 1,000 Dances, and Wales.

England will especially relish the opportunity of overturning the 3-1 defeat suffered at the hands of the Hebridean fort back in 1995, but will face the team containing Bony Maronie, Long Tall Sally and The Watusi for the first time.

Capello said: "Narnia do offer some threat, what with the enormous talking lion up front who also happens to be Jesus.

"But their weakness is their continued insistence on having Mr Tumnus in goal, trying to clear the ball with those tiny hooves. Then again, he is better than Scott Carson."

He added: "And of course playing a land full of fairies and elves with no motor cars or electricity is perfect preparation for the match in Cardiff."

Scotland manager Craig Levein was less optimistic after his side were drawn against reigning champions Spain. He said: "If we had to play children's TV characters I'm pretty sure England would get Iggle Piggle and we'd get Optimus Prime in a fucking Brazil shirt."

Meanwhile, the new England captain Rio Ferdinand has been sent on an intensive six-week course to help him identify the difference between heads and tails.

But as Ferdinand left for coin school it emerged he would no longer be available for interviews after paying himself £800,000 not to talk to the media.

His spokesman said: "We have tried explaining to him that paying people hush money is not an obligatory part of the England captain's job, but he just keeps saying he wants to lead by example."