Even I'm not sanctimonious enough to turn vegan, says Corbyn

JEREMY Corbyn has admitted that even he is not self-righteous and smug enough to become a vegan.

The Islington North MP, who he judges everyone he meets and finds them all morally lacking compared to himself, believes veganism is a bridge too far.

He continued: “Don’t get me wrong, I think I’m better than everybody. Point at any random MBE recipient and I’ll be like ‘Where were you when I was campaigning for Cuba in 1991?’

“But vegans, Christ. I mean I’m on more of a broad spectrum when it comes to my innate superiority, so between me going on about gay rights and unions and Hamas at least there’s a bit of variety.

“But this vegan couple I know, Simone and Gavin, honestly it’s their only topic of conversation. One time when I was with them I ordered the cheeseboard, and they still act like I slaughtered a cow in front of them.

“No, I’m sorry. I may not have a car, and I don’t eat meat, and privately I spell ‘America’ with three Ks, but it’s just not in me to be that much of a self-satisfied arse.”

Corbyn’s friend Simone said: “Actually we’re fruitarians now. So to us Jeremy is worse than Hitler.” 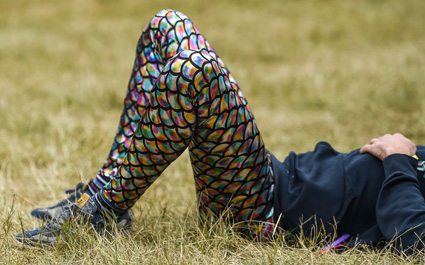 A MAN who wore a pair of glittery leggings at a festival thinks he’s a daring gender pioneer rather than a stereotypical arse.

Stephen Malley, 31, is still talking about how ‘amazing and free’ he felt after wearing the leggings for an afternoon when he had drunk two pints and smoked some of a spliff.

Malley said: “I felt like I was a radical outlaw flirting with the fringes of society, even though I paid £230 to get into the festival and I was pleased to note that the security was excellent.

“Wearing the leggings was my way of expressing my feminine side and showing that I can break free of the constraints placed on me by my gender. Even if I’m not really sure what those constraints are.”

Malley’s friend Martin Bishop said: “75 per cent of the men at the festival were in leggings and they all thought they looked as confident as Eddie Izzard, despite being painfully self-conscious about their knobs showing.

“Steve just wanted this girl to think he was all wild and crazy so she’d sleep with him. Which worked for a while but he put his trousers and a fleece back on at 9pm because he said it was ‘nippy’.”