Harman's Husband Urged To Shag Her

THE husband of Labour's deputy leader Harriet Harman was last night urged to give her a right good seeing to.

As Ms Harman called for all boys under 10 to be forced to wear bras for a year, men and women across Britain pleaded with Jack Dromey to take her to a West End show, fill her full of champagne and then close his eyes and just get on with it.

A cross-party group of backbench MPs has tabled an early day motion calling on Mr Dromey to sexually intercourse his wife for an initial period of 20 minutes and then a further 15 minutes if she still won't shut up.

Conservative MP Stephen Malley said: "The key problem is that as a lifelong trade unionist Mr Dromey probably agrees with her. We are simply asking him to set aside his beliefs, for 35 minutes at the most, so that we can all enjoy the rest of our summer."

Labour backbencher Tom Logan warned: "Harriet and Jack have been married for 27 years, so we can probably assume he has shagged her at least once. Can we really expect him to do it again?

"If he refuses then I suppose we could always ask the Saudi Arabian ambassador if he, or any of his relatives, would like to buy her."

Emma Bradford, a housewife from Stevenage, said: "Last week I told my husband there should be more women in positions of power. He immediately grabbed me by the hand, took me upstairs and demonstrated a series of positions that he felt I was suited to. I then went back downstairs and made a lovely cake."

Bill McKay, an accountant from Peterborough, added: "I could be persuaded but only if I can throw in some laundry as part of the deal. I don't imagine for a second that it would be very pleasant but, you know, mantelpiece, fireplace, poking, etc etc."

...oh And By The Way, There's Plague In China 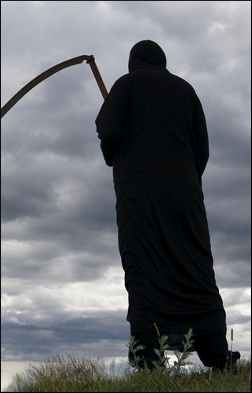 THREE people in China have died from the plague, if anyone's interested, the World Health Organisation said last night.

WHO officials stressed that it was not as if some Mexicans had got the flu and was really nothing to worry about.

A spokesman said: "It's only China. Even if they were to close their borders you're still just talking about a risk to maybe a billion people, 1.3 billion at a push.

"If – somehow – it was able to spread to nearby countries, it's still only 72 million Koreans, 128 million Japanese, 140 million Russians and about a billion Indians. And India is totally set-up to deal with plague, so we're not fussed."

He added: "It's not as if the western world is importing huge amounts of stuff made by undernourished Chinese peasants in dirty factories."

In Britain health officials stressed that plague was really easy to handle as the carrier fleas would not bite you if you had recently washed your hands or blown your nose into a fresh handkerchief.

Dr Tom Logan, of the British Medical Association, said: "If you've been to China recently and are feeling a bit plaguey, eat an apple, maybe drink some Lucozade, but otherwise go to work as normal and feel free to rub yourself against people on the tube."

A department of health spokesman added: "Meh, it's just a bit of plague. Here in Britain we have a proud history of plague immunity, or 'Black Death' to give it its comedy nickname."