LABOUR MPs are to spend the next seven weeks updating their CVs and talking to recruitment agencies.

As the general election starting gun is fired the party leadership has ordered an all-out effort by MPs to start looking for other jobs.

Leader Jeremy Corbyn said “There are some terrific opportunities out there. I’m really interested in fashion and the media so it would be great if I could find an opening that combined the two.”

Shadow home secretary Diane Abbott said: “I’ve held senior positions within a large organisation for the last two years and have shown initiative and team leadership skills. I enjoy motivating others and I thrive under pressure.”

Deputy leader Tom Watson is set to return to his previous career of hauling unconscious drunks from the toilets in Colchester’s seventh most successful nightclub.

Meanwhile, former shadow foreign secretary Hilary Benn has dug a large hole in his back garden where he intends to stay until the end of the year. 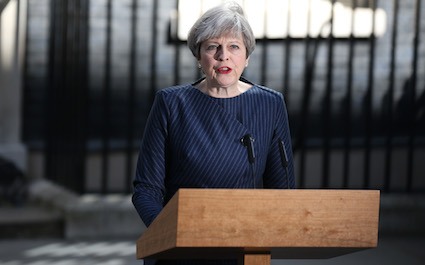 THE PRIME minister has announced that the general election on June 8th will be Britain’s last.

Theresa May has told Britain’s citizens they will be allowed to exercise their democratic rights one final time to give her rule the stability it needs.

She said: “Despite my repeated demands for unity, still we are plagued with disagreement and opinions which I will charitably describe as ‘different’.

“This election will establish, once and for all, that I and my policies are right and backed by everyone, forever.

“Following this there will be no further elections because the uncertainty is bad for markets. There will only be certainty, glorious certainty, for us all.”

May also told Britain that the time for childish support of ‘other’ parties has come to an end, and she would like everyone, especially the Scots, to grow up and vote Conservative.

She added: “An all-Tory House of Commons would be a wonderful climax to British democracy.”