May offered me drugs, claims Juncker

Juncker claimed that May and her Brexit team were ‘clearly high’ during the lunch and repeatedly invited him to join them.

He added: “May said, ‘Let’s make Brexit a success,’ then leaned across the table to offer me the fattest line I’d ever seen, her eyes glittery and unfocused.

“She seemed shocked when I refused, then told me we could sort out all this ‘rights of EU citizens bullshit’ tonight if we wanted because she had some 90 per cent pure MDMA. Again, I declined.

“As I stood to leave she shook hands, then hugged me, then inhaled deeply of my scent while going ‘mmmmmm’, then said she regretted our disagreements.

“I agreed then she smiled and said, hopefully, ‘Ket?’”

May promises she won't raise VAT or call a snap election 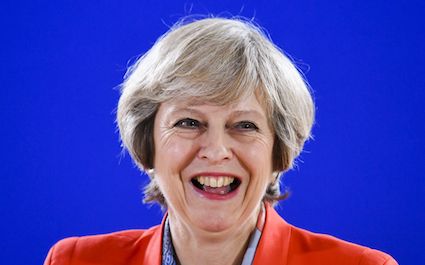 THERESA May has pledged not to raise VAT or to call a snap general election ever.

May made the promise to a room full of people who were already going to vote Tory anyway and were all happy to just ignore what she had said and keep acting like voting Tory was a good idea.

To wild applause May said: “I said there wouldn’t be a snap general election there won’t be one.”

The prime minister was then reminded by an advisor that she had already called a snap general election and that she should probably just try and pretend that she did not just say what she had said.

“And you can take that to the bank and cash it.”