Oh For Christ's Sake Just Do It, Britain Tells Labour

LABOUR was today told to just get on with it so we can all have a peaceful weekend without having to watch Nick Robinson jumping up and down like a child that's bursting for a piss.

As someone called James Purnell resigned, millions of people across the country urged Labour to hack off Gordon Brown's fingers with a meat cleaver, warning they were now getting dangerously close to feeling sorry for him.

Tom Logan, from Doncaster, said: "If I start to talk about how his droopy eyes and creepy smile are actually quite endearing then you must promise you will kill me. Promise it!"

Mr Purnell said he hoped his resignation would give a lead to others, while serving its primary purpose of seeing his name in big, bold letters on the front of the Financial Times.

Margaret Gerving, from Bristol, said: "Purnell… Isn't he the chap with the sideburns who invented the Clifton Suspension Bridge and that big boat with all the funnels?"

As the prime minister clung on to power a procession of cabinet ministers attacked Mr Purnell and pledged their loyalty to Mr Brown until, oh, about half-twelve probably.

Foreign secretary David Miliband said: "I profoundly disagree with James and think he should at least have had the courage to wait until the local election results were in before calling for me to be made prime minister."

Meanwhile Britain's bookmakers have revealed multi-million pound losses after betting against someone in the cabinet having a pair of nuts. 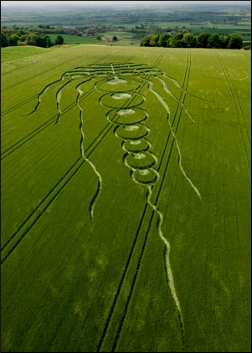 A CROP circle depicting the genitalia of TV talent show judge Amanda Holden has appeared in an Oxfordshire field.

Experts say it is the most accurate representation of a famous sex area yet undertaken by aliens and heralds a spectacular summer of B-List celebrity private parts invading Britain's cereal industry.

Denys Hatton, of the website CropCircleData.com, said: "'What's really notable is the detail. It appears to show a slightly grown-out Brazilian with a few straggly 'spider-legs' on either side."

He added: "Even someone who had never seen Cutting It or Britain Must be Stopped would have to admit that it's obviously Amanda's fun-zone."

Professor Henry Brubaker, of the Institute for Studies, said: "It's possible the aliens are tapping into some kind of collective consciousness and chose Amanda Holden's vagina because of its deep symbolic resonance.

"Or maybe they just want to help her break into the American market."

He added: "Either way, we haven't seen this level of intricacy in a celebrity vagina crop circle since Davia McCall's labia appeared in a field of beans near Leighton Buzzard."

But the field's owner James Peakes, of Parsonage Farm, was less impressed: "I'm sure many men dream of being able to see Amanda Holden's fandango from their kitchen window, but it's actually quite annoying.

"Hundreds of people have trampled my crops, and I can't even charge admission as technically that would make me a pimp."

His wife Sarah added: "I don't see why anyone would want to cross the universe in a spaceship just to draw Amanda Holden's twat in some barley. But if it was aliens, then they need to get a life."