THE government’s plan to wipe out Britain’s deficit using little bits of discarded soap is not going well, David Cameron has revealed.

The prime minister said the Treasury had collected more than 50 bits of soap that had been thrown in bins after becoming too small to be of any real use.

But he added: “Despite our initial estimates, it seems they are virtually worthless.

“We may be able to reduce the deficit by 75 pence if we can somehow squeeze them all together and make one large bar of soap.”

Julian Cook, chief economist at Donnelly-McPartlin, said: “It can be difficult to pay off your debts when you don’t have any money.

“When George Osborne outlined his deficit reduction plan last year I actually wrote to him and said ‘well done, this is all makes perfect sense right up to the point where you start talking about money.

“He then sent me a photo of some bits of old soap with a Post-It note attached to it which read ‘how do you like them apples?’.”

He added: “But at least  the National Soap Strategy is not in the hands of that shit-eating, moon-faced twat who cries when he watches Antiques Roadshow.

“Presumably because he can’t bear the idea of someone making a profit.”

Most churchgoers just there to steal copper off the roof 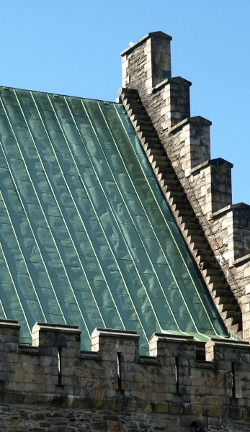 MORE people are visiting churches to steal metal than to worship, it has emerged.

A decline in God belief has corresponded with a sharp increase in the value of copper roof tiles, which has encouraged a new breed of crime-based churchgoer.

Vicar Emma Bradford said: “Although these new people mostly bring ladders and don’t actually come into the building, in these spiritually-bereft times we’ll take what we can get.

“We’ve taken to doing sermons in the middle of the night, especially for all the people  on the roof. Content-wise we steer it away from the anti-stealing stuff as we don’t want to seem judgemental.

“It does get rather wet in the church nowadays but it’s nice to be relevant again.”

“He does everything for a reason and he definitely put those copper tiles there so that they could be nicked and weighed in.

“In fact I’m fairly confident it says something in the Bible like ‘Blessed are the ladder-owners and those not scared of heights, that they might inherit my tiles.'”