UNITED Nations election observers last night labeled Scotland as one of the most knuckle-headed countries on the face of the earth.

With more than 90% of the votes cast rendered utterly useless, the UN said the election would have been more efficient if it had been managed by a group of orangutans.

In Edinburgh more than 40,000 votes were incinerated after election workers stuffed ballot papers into microwave ovens instead of electronic voting machines.

In Glasgow 25,000 votes were binned because they were covered in chocolate. Meanwhile in the Western Isles dozens of ballot boxes were stolen by gangs of highly organised mice.

In Inverness armed police had to be called in when workers at the count started making paper aeroplanes out of ballot papers and refused to stop.

Scotland Office minister David Cairns said: "With hindsight it was probably not the best idea to put Frank Spencer in charge of a national election."

Spencer was unavailable for comment as he had trapped his hand in a ballot box and was in the process of destroying thousands of pounds worth of crockery.

Stephen Malley, head of the UN team, said: "We've been to Africa, Asia and South America and witnessed elections marred by violence and corruption, but you people are easily the biggest bunch of cretins we've ever encountered."

Brown 'Beats Crap' Out Of Mcconnell On Eve Of Poll 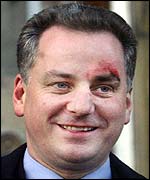 With the party clinging to power by its fingernails the Chancellor lashed out at the Scottish Labour leader, accusing him of "disrespect, disloyalty and being rubbish".

Like a scene from the Godfather, Brown chased McConnell down the corridors of Labour HQ, hurling obscenities and wielding a dustbin lid.

It's the first time this year that Brown has administered a full-scale beating to a Labour colleague.

Usually the Chancellor will use more subtle methods of control such as putting salt in a sugar bowl or taping over their favourite programmes.

A source close to Brown said: "It's been a long time coming. Jack thinks he's the man but when Gordon gives an order you don't ask questions, unless you want a bowling ball dropped on your foot 'by accident'."

An ally of McConnell said: "He fought like a tomcat. Brown is bigger and heavier but he had reinforcements. I'd like to see them go at it again, but next time just the two of them."