What’s wrong with Boris? A baffled Tory tries to work out why his hero has gone green

CARBON net zero? What happened to the good old days of zero belief in global warming? Who’s got to Boris? Norman Steele investigates:

It’s all a trick

Boris is the consummate con-artist and with this climate conference next week, there’s a boatload of marks incoming. Act like Mr Green, get them all signed up to zero-carbon, corner the coal market for a song. Our lights on and their lights out. What a geezer.

Carrie’s got to him

It’s well known that Boris’s greatest weakness is his dick, and his young bride – better than Kate, pound for pound, for my money – may have hypnotised him via his member. Big mistake, lady. That Churchillian spam javelin is wayward. It’ll be shagging an oil heir next.

It’s all to piss off Cameron

Brexit, becoming prime minister, basically this whole government: it’s all because Boris is rightfully angry Cameron jumped the queue. The lad Johnson’s remembered his predecessor did some green shit and is once again betting the country on outdoing him. You have to respect the pettiness.

We’re getting technology from aliens

Or the future, one or the other. The Boris charm has persuaded them to give us incredible blue glowing energy cubes and we’ll use them to develop green power, sell it on, run the world. It is hypothetical but it’s not been disproved, unlike climate change.

None of it’s true

The man lies! He simply lies. It’s one of his best and most authentically Conservative qualities. All this green ground-zero bollocks is to dominate headlines the week it was revealed he and his wife had their mate over at Christmas breaking lockdown rules. See? You hadn’t even heard about that.

Five Covid rules you haven't stuck to since Freedom Day 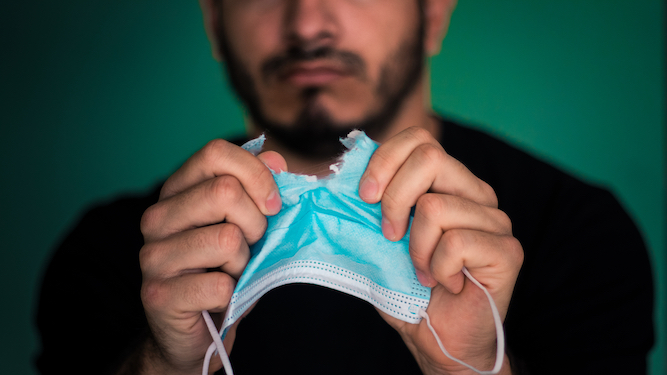 INFECTION numbers are through the roof again, because nobody’s done any of these since Monday July 19th:

You’d worn a cloth over your mouth for months. But nobody else in the shops was wearing them and you looked like a freak, so you stopped. For a while you thought that anti-maskers might be onto something, but now look where we are.

Ramming a swab down your throat and up your nose sucks, but it had a clear purpose. You knew if you had it. But the tests ran out and you’ve been double-jabbed so it’s game over for Covid, right? The looming threat of another cancelled Christmas suggests otherwise.

Last April you’d take your chances against traffic if someone was walking towards you. Now you’re huddled around your mates in the pub, spluttering into each other’s faces about the gig you’re at next week. You thought those faded two-meter things in shop queues were a faded curio.

Sure, you’ll give them a scrubbing after taking a dump, and maybe a quick rinse after a piss, but that’s it. And half the sanitiser pumps in shops and pubs ran dry months ago so when you use them you just get alcohol-scented air.

Not touching your face

Being unable to rub your eyes with your potentially diseased hands was a bit weird, but you improvised. Since Freedom Day you’ve been clawing at your face with wild abandon and cultivated a deadly new variant in the process. If there’s another lockdown it’s on you.