THE Brawn racing team completed a Cinderella story yesterday after clinching the opening grand prix of the season with nothing more than millions and millions of pounds.

The victory in Australia marked a stunning turnaround in fortunes for the humble, soot-covered team, created just months ago after a management buy-out involving fairy dust and money.

Winning driver Jensen Button said: "I suppose it's a bit like David beating Goliath if David and Goliath had been roughly the same size."

Like many of the characters in Cinderella, the senior members of the Brawn GP team live in large, comfortable houses and have domestic staff. They also attend lavish parties in expensive vehicles and own footwear made from a variety of exotic substances.

The team has also recently acquired a bearded fairy-godmother with her own fleet of Boeing 747s, a train company and an island in the Caribbean.

Meanwhile Jensen Button lives in a luxury apartment in Monte Carlo so he doesn't have to pay income tax on his multi-million pound salary, exactly like Cinderella.

A Brawn GP spokesman said: "We made this car with nothing more than lollipop sticks, elastic bands and an enormous amount of money.

"But we have had to tighten our belts which has meant using private jets, helicopters and five star hotels like some band of travelling gypsies." 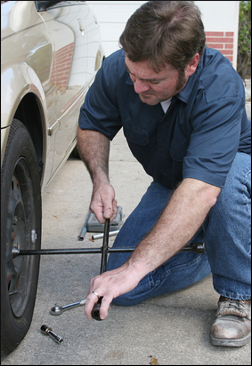 DIRTY bombs are nowhere near as dirty as some of the stuff you can get on cable, home secretary Jacqui Smith said last night.

In a keynote speech on security and immigration, Ms Smith said that 21st Century Britain is like a lone female driver who has broken down in the middle of nowhere and is waiting for a greasy, inarticulate mechanic to turn up and fiddle around under her bonnet.

The home secretary told the Fabian Society: "He'll pop my hood and polish my rivets and then I'll ask him to pull out the dipstick.

"I'll wipe it with a clean, dry cloth and then we'll find out exactly how much fluid there is in my tubes."

Ms Smith said terrorism could only be defeated if people from different communities were willing to put aside their grievances and work together, much like the all-female cast of Strap-On Gang Bang 7.

The home secretary also outlined plans for a renewed crackdown on economic migrants, adding: "Unless of course it's some dirty big Polish plumber who's just desperate to show me what he can do with his plunger.

"Okay, so his English is not very good and his national insurance contributions might not be up to date, but at least he can flush my u-bend and tighten my leaky flange."