Candles were lit in front of a hastily erected shrine depicting the striker in a taxi heading up the M6, while others released white doves clutching ceremonial transfer cheques.

Adebayor fell out of favour with Arsenal fans after sitting in a deckchair and reading a book on the halfway line during a Champion's League match.

Arsenal manager Arsene Wenger said: "City are keen to sign Ade, as well as the tea lady and a really nasty painting of Ray Parlour in the board room.

"I offered them a brace of cheap Ivory Coastians and as many Frenchmen as they could fit in their van. The next thing I heard was the 'beep-beep' of a forklift backing up with all the money."

City will pay by the hundred-weight for the players, with Wenger offloading whatever leftovers are hanging around the changing room, and Tomas Rosicky.

He added: "I've completely forgotten what we originally bought him for. Does he clean the bogs?"

City are expected to field a 1-1-8 formation with Adebayor playing in the inside-wide-right-secondary-holding striker position until someone explains to Mark Hughes what midfield is.

Wayne Hayes, secretary of the Arsenal Supporters' Club, said: "Arsene brought us success, beautiful football and the glorious Thierry Henry. But if the Adebayor deal falls through, I swear I'll rip his cock out through his nose."

Meanwhile, as Chelsea captain John Terry ponders a move to Man City, his agent said: "John's a winner which means we'll need enough money so he can buy a solid gold Aston Martin and then pretend he won it by playing football." 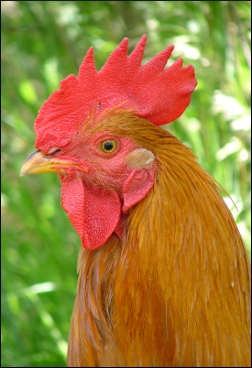 MAYOR of London Boris Johnson is the owner of a record-breaking chicken it emerged last night.

The 6' 8" bird lives in the back garden of Mr Johnson's West London home, where it is usually disguised as a policeman.

The mayor purchased the chicken last October and feeds it with a mixture of sweetcorn and fresh peas using the £250,0000 he receives for writing a weekly column in the Daily Telegraph.

Mr Johnson said: "He's a cock and he's called Max, after Max Hastings, who gave me my first job at the Telegraph covering the EU Poultry Commission in Brussels.

"The plan is to fatten him up, kill him, roast him and then hand out chunks of thigh to all the jolly poor people of London so their bellies are full over Christmas.

"'Oi, Mr Boris', they'll say, 'give us another lovely chunk of giant chicken', and I'll say, 'now, now you cheeky rapscallions, you've had your share, back to the gutter with you or you'll feel the lick of my driver's whip'. What larks."

He added: "I will of course be keeping the breast and leg for myself, which is only fair as I put a huge amount of thought and effort into the earning the money to buy the feed, as anyone who reads my column will no doubt confirm."

Mr Johnson could now face a showdown with Conservative leader David Cameron who has instructed his shadow cabinet to give up their giant chickens.

Londoner Tom Logan said: "If you've got a big chicken then you need a lot of feed, but what really concerns me is why the Telegraph is handing over 250 grand when nobody gives a fuck if Boris Johnson writes a column or not."