England To Be Excused From Sports

ENGLAND has asked to be excused from sports for the rest of the year after producing a note from its mum.

Senior teachers are still assessing whether the note is genuine, but it seems likely the country will be allowed to use Wednesday and Friday afternoons for study time.

The note reads: "Dear teacher, My England should not have to do sports no more cause it's got an infected toe and a swollen wrist.

"The doctor says it needs to stop doing P.E. and be allowed to sit in the corner with its hand down its pants."

Meanwhile classmates of the slow, awkward country welcomed the decision, stressing that having England on your team was worse than having to play with a girl.

Wales said: "England used to be quite good at sport but now it's all fat and speccy and useless.

"It just stands there in its vest and its crap trainers, looking like a twat."

Wales added: "You know it's time to pack it in when Scotland gets picked before you do."

But Mr Hobbs, the PE teacher, said this was typical of England, adding: "You horrid little turd.

"Strip down to your fatboy undies and climb those wall bars before you get my toe up your arse."

RAF To Bomb Peterborough Back To Stone Age 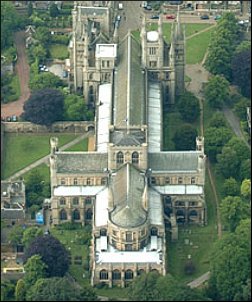 PETERBOROUGH was today bracing itself for wave after wave of devastating raids by low-flying Tornado fighter-bombers.

The historic cathedral city has been targeted by RAF chiefs after air force personnel were called names by some students.

Air Chief Marshall Sir Tom Logan said: "Our brave airmen have been subjected to ill-considered taunts from some of Peterborough's most fanatical and determined Guardian readers.

"We could simply ignore them and go about our business, but that would send the wrong message to our enemies in Iraq, Afghanistan and France."

The raid will be carried out by a formation of six Tornadoes each carrying a 200 pound Geronimo, laser-targeted bomb, also known as the 'Cathedraliser'.

Many people have already evacuated, although a Guardian-reading hardcore has pledged to shout incisive criticism at the planes as they unleash fiery death.

Sir Tom added: "Thanks to the cutting edge technology of today's RAF, this charming, provincial city with its treasured medieval architecture will be a smouldering husk by around tea time.

"Peterborough has made its date with destiny. I would strongly advise its citizens to flee to Grantham. If you're going via the A1, there's a lovely tearoom at Woolsthorpe."