Everyone injured at middle-aged football game

A GAME of football between 40-year-old friends has left everyone involved injured.

Retail manager Tom Booker organised the casual game at a local sports centre, and was the first to be carried off as his ankle gave out while walking onto the pitch.

Booker said: “I thought I was still pretty fit for my age but perhaps working in an office has taken its toll. I was definitely disappointed to be out of proceedings before they began.”

Booker’s 43-year-old cousin Roy Hobbs was next to succumb, dislocating his knee by kicking the ball. He said: “The lady from the sports centre put some ice on it but it looks like a grapefruit. I might have to go to hospital.”

The pattern continued when Booker’s brother-in-law Stephen Malley jumped up to head the ball, injuring both his back and neck in the process.

He said: “I heard a crack, and then another crack. Probably some discs or cartilage or something, whatever it is I won’t be going to work this week.”

After the 12 minutes’ warm-up kickabout, all players on both teams were injured and the pitch was empty apart from an overweight marketing executive who couldn’t get up.

Tom Booker said: “It was still fun though, we’ll definitely do it again next week.”

Poppers users wondering how else to get pounding headache 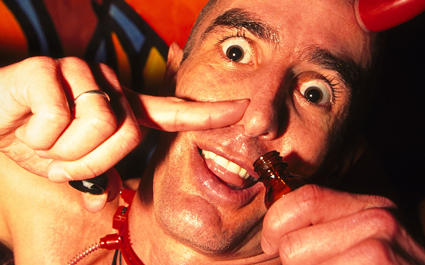 AMYL nitrate users are concerned about where they will get their instant headaches if it is made illegal.

Clubber Julian Cook said: “Poppers give you a short-lived high as a side effect, but really it’s all about getting the biggest headache imaginable.

“I once spent three hours with my head pressed against a washing machine on full spin and didn’t get a tenth of the right-behind-the-eyes-bastard a whiff of amyl can give me.

“The next time I need a real teeth-clenched-silently-weeping headache, one of those where I can’t even open my eyes for the pain of the light blooming and fading, where will I go?”

He added: “I suppose there’s always carbon monoxide. That’s legal, so it can’t be bad for you.”