Everyone to start supporting Barnet

FOOTBALL supporters are to switch their allegiance to a team whose scumbags they have never heard of.

Third division club Barnet FC will prepare for the influx of several million supporters by borrowing some folding seats from a nearby church and ‘muddling through’.

Fan Martin Bishop said: “As far as I know, none of Barnet’s squad have put their penis into any of my relatives or blacked up recently, so I have no reason to detest them, as yet.

“I will miss supporting players that have some nominal control over where the football goes and looking at a pitch with grass on it, but it’s a small price to pay compared to the mental energy I have been expending inventing imaginative tortures for eleven people I’ve never met.”

Experts predict it will take Barnet’s 17 million new fans approximately three months to start loathing aspects of their new team, probably after an incident outside a nightclub involving a watermelon, a 17 year-old girl and an innocent cat.

Footballologist Wayne Hayes said: “The critical mass for arsehole footballers – the number past which some form of dickery will present itself – is four, so Barnet should contain about six people you wouldn’t trust to sleep in your shed.”

Bishop added: “I’m sure that before too long one of them will say something horrible to Park Ji-Sung, but in the meantime ‘Come on you badgers!’.

“Have I got that right?”

Roundabout traffic flow to be reversed during Olympics 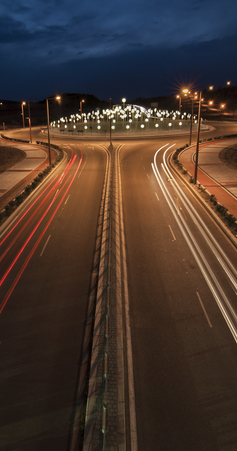 TRAFFIC flow on roundabouts will be switched to anti-clockwise for the duration of the Olympics, the Government has announced.

Officials said the move will ensure the event meets its target of causing painful inconvenience to every single person in the country, not just London.

The new traffic regulation, which will be imposed from July 27 to August 12, means that motorists will have to choose between remembering the Olympics are on or being killed or maimed in a head-on collision.

A spokesman said: “The 2012 annoyance committee realised that having the psychotic logo, the pair of terrifying cyclops monsters and adverts filled with potential heroes was not annoying every last sentient being on mainland Britain.

“This will not only enhance the Great Olympic Celebration but should also increase road traffic accidents by at least 500 per cent. It’s very exciting.”

Signs with the psychotic logo and the five Olympic rings will be erected on every roundabout urging motorists to, ‘Go for Gold – Go the other way round!’.

The spokesman added: “Best of all, the roundabout reversal strategy will cost at least £280 million, pushing the total taxpayer bill for the Olympics ever closer to the £30bn target.”

Tom Logan, from Hatfield, said: “At least I’ll be able to get very excited about the victories of strangers who happened to be born in roughly the same area of the Earth’s surface that I was.”