Man United sack Moyes back to the Stone Age

DAVID Moyes is being fired so hard he will have to take on two full-time jobs just to be unemployed.

Experts said the Manchester United managers 11 months at the club have culminated in him being less popular than Jamie Carragher singing Ferry Cross the Mersey while wiping ghastly parts of himself with a photo of Sir Matt Busby.

Vice Chairman Ed Woodward said every trace of Moyes will be expunged, adding: We will even remove all the letters of his name from the club, so we’ll now be called Nchtr Unit.

History will record that during the 2013-2014 season we went backpacking around South America and when we came back Liverpool had somehow won the league and we’d strangely inherited a Fellaini.

In a ceremony at Old Trafford later today, 75,000 supporters will watch as the Glazer family take a run up before handing Moyes his P45 wrapped around a massive spider.

He will then be placed in a helicopter and flown over a nearby patch of waste ground where hundreds of prize-winning United fans will spell out ‘Off You Fuck in 50ft letters.

The helicopter will then carry on until it lands shortly before running out of fuel, leaving Moyes in the middle of a wheat field in Somerset, surrounded by a gang of frightened, angry locals.

Meanwhile, he will be symbolically fired by both Houses of Parliament, the Queen, the CBI, Ofcom, the Royal College of Nursing and the General Synod of the Church of England.

For the rest of the season the team will be managed by Ryan Giggs pointing his smartphone at training sessions so that Sir Alex Ferguson can make informed decisions.

Six-year-olds to be taught swearing 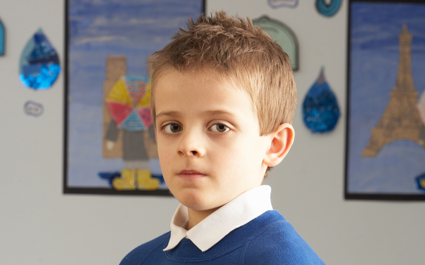 SWEARING education for six-year-olds is to become mandatory.

As of next year, swearing classes will feature in the curriculum at Year One stage. Children will initially be taught basic terms such as ‘piss’ and ‘shit’ before working their way up to more advanced usages like ‘giant bell end’.

Educationalist Donna Sheridan, who developed the pilot scheme, said Ignorance of the basic facts of swearing is shockingly widespread. It alarms me to hear grown adults using infantilisms like poo and wee.

Without swearing, we would be unable to articulate shock or alarm and consequently would probably die out as a species.

Those who object to swearing education should come down to our schools and see what we are doing. I would gladly sit down with them and tell them that theyre a shitload of twats.