THE English flag, long considered the preserve of far-right nationalists like the English Defence League, has been re-appropriated by ordinary idiots.

Euro 2020 has appealed to England supporters who are not neo-Nazis, have black friends and a good-natured outlook, but are still knobs.

Tom Logan of the England Supporters’ Club said: “People have a stereotypical view of England fans as Sieg-Heiling skinheads chanting ‘No surrender to the IRA’ and smashing up town square cafes.

“I’m none of those things. I’m simply someone who supports England, passionately wants them to do well and happens to be pretty annoying and boring about football.

“Or should I say ‘ENGERLAAAND!’ Right, time for my eighth pint.”

Sports writer Tom Booker said: “There’s a peaceable segment of England fans who aren’t hostile to foreigners and just get incredibly drunk whilst abroad, put their arms around locals and shout, ‘Oi, here’s my my new mate, Pedro!’

“To stereotype England fans is grossly unfair. To foreigners I would say – the only real risk they pose is boring you senseless with their unwanted attempts at mateyness and attempts to find a chip shop at 5am.” 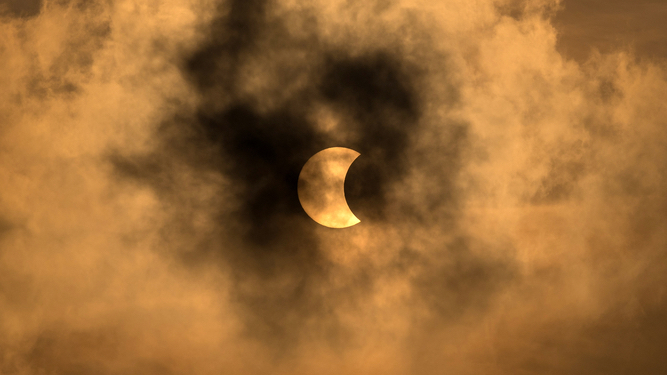 A PARTIAL eclipse of the sun is f**king nothing compared to the total one we had in 1999, an astronomer has confirmed.

Stargazer Bill McKay has revealed that partial solar eclipses are by far the least spectacular of all the cosmic alignments, and are the laughing stock of the scientific community.

McKay said: “You wouldn’t thank a waiter for partially bringing over some of your meal, yet here you are trying to get excited about nature doing a half-arsed job. It’s embarrassing.

“Back in 1999 we rightly lost our shit because the moon got in the way of the sun properly and made it night-time for two minutes. And even though we couldn’t see anything because of the cloud cover, it was still a big deal.

“You can tart this one up all you want by calling it the ‘Ring of fire’, but now it’s over you’ll be hugely disappointed. We’re not superstitious medieval peasants who think the world is coming to an end, so a massive non-event, really.

“Also your homemade pinhole projector makes you look like a f**king dick.”