Recent signings including Emmanual Adebayor and Roqué Santa Cruz, alongside existing players like Craig Bellamy, have boosted City's despicability rating. Hopes were high that neutral fans would not find anyone they would be willingly to urinate on, regardless of whether they were on fire or not.

Terry's decision means City boss Mark Hughes will now be forced to find another centre back who blames his teammates for his own mistakes, often before the game has even started.

But the Chelsea captain said: "My decision was never in doubt and that is why I decided to say absolutely nothing for as long as I possibly could."

He added: "With Ballack, Lampard and Essien, I think Chelsea can still be the most eye-gougingly repulsive club in the country.

"Look at our front two. Who would not jump at the chance to smash Drogba and Anelka's teeth in one by one with a toffee hammer. Even our own fans dislike them, and that's just world class."

"Gary Neville will soon be sent to live on a farm and Michael Owen is quite lovable in a fragile sort of way, like the little boy from The Sixth Sense.

"If Ferguson resigns, the title's ours. They'd have to hire Gary Glitter as coach to have any hope of being hated more." 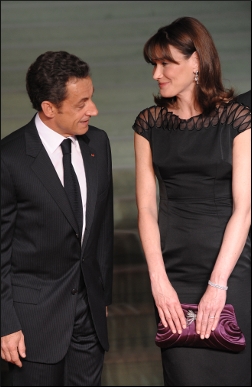 FRENCH president Nicolas Sarkozy has finally been broken by his unbelievably hot wife, it has been confirmed.

Mr Sarkozy was admitted to hospital on Saturday after feeling faint at the thought of seeing the first lady in a silk nightie immediately after his daily five mile run.

An Elyseé Palace spokesman said: "The president is a man of vigour, but you can't start thinking about Carla Bruni when you're already out of breath. You may as well put a gun to your head."

Dr Pierre Dufarge, a leading cardiologist, said: "There is simply no way the human body can spend all day wrestling with domestic and international crises and then be expected not to jump all over Carla Bruni like a rabid dog, or indeed, a Frenchman.

"If she had any sense of decency or fair play she would have married a drug-addled, folk-singing hippy who is barely aware that he is even conscious."

Dr Dufarge has called for Mrs Sarkozy to be housed in a separate building behind three inches of bullet-proof glass and shown to the president for no more than 15 minutes a week.

He added: "They may be allowed physical contact during holidays, but only if there is a highly respected cardiologist in bed with them."

Dr Dufarge added: "I think he has done incredibly well to get this far. Personally I wouldn't have lasted five minutes.

"But I'll tell you what, they would have been the best five minutes of my pathetic little life."