SO I was in the Bing the other day with the guys – Paulie, Silv and that fat fuck Bobby. We started talkin’ about what team’s gonna win this fuckin’ World Series Cup they’re playing over in South Africa. Anyways, Christopher walks in with a box of Cannoli and – for some fucking obscure reason – a meatball and Ragu sandwich for yours truly. “What the fuck is this?” and he comes back with “It’s your sandwich Tone – just like you fuckinâ€™ ordered.”  So I threw the sandwich on the ground and started to get real angry, “I wanted the Panini sticker book – not a Panini, you dumb prick”.

Anyway, so I went for Brazil because of their pedigree, fancy fuckin’ footwork and all that other shit they go about with. Out of respect, Silv decided to go with the old country and Christopher and Paulie both went for England for some dumb fuckin’ reason. Meanwhile, the Pilsbury-fuckin’-doughboy reckons those Dutch cocksuckers are in with a chance. “My ass”, I shouted, as I threw the box of Cannoli at him.

You know what? I think this tournament is too close to call. I was saying this to Johnny Sac’ during our sit-down about those no-shows over at the new marina. “John” I says to him as I sipped on my Cappuccino, “the fucking Krauts are missing Ballack, the Dutch haven’t got the balls for it no more, the French are a spent force, and the host nation are about as much use as a pair of tits on a bull”. John proceeds to stub his cigarette out in the ash tray and says to me, “Look – I donâ€™t care if Pele’s taken one of them Viagra pills he advertises on the TV, and stuck his dick up his own ass, I’m here to talk fuckin’ business”. Judging by his tone of voice I’m kinda ruling him out of the tournament sweepstake.

I had to go over and see my shrink – after that thing that went down a couple of weeks ago I figure I needed some therapy. Anyway, Dr Melfi starts the session off with “What would you like to talk about today, Anthony?” I told her I had a lot on my mind these days – like Iâ€™m worried the bottom’s gonna drop out of waste management because of this – what the fuck do they call it? – credit crunch. And of course I got a bit of action on that fuckin’ Rhesus monkey they call Rooney being top scorer and was anxious about the dumb prick gettin’ injured or sent-off. Who’d be the boss, huh?

I was sittin’ in my office the other day, smokin’ a fat cigar and generally feelin’ pretty good about things when Paulie comes into the office with a face as long as John Holme’s cock after a visit from the fluffer. “I’m sorry Tone”. “What the fuck you gotta be sorry about, Paulie?”. Paulie Walnuts ain’t exactly a ray of fuckin’ sunshine at the best of times, so he does one of them big sighs and says, “I looked high and low T – they ain’t got no World Cup wallcharts left, nowhere”. That was it, after the week I had. “THEM MOTHERLESS FUCKS!”, I screamed as I threw my medium 76 inch pizza against the wall. Then I told Paulie that I don’t care what it takes – I want that chart on the clubhouse wall in time for the opening fucking ceremony. Capice? 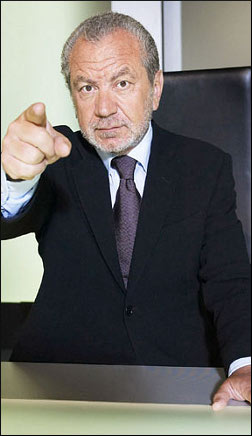 THE 17 year-old winner of The Junior Apprentice has been urged to grab a two litre bottle of cider and a copy of Porky’s, the 1980s high school romp, before he turns into an irretrievable tosspot.

Arjun Rajyagor won the title after impressing Lord Sugar with a smart, simple presentation on marketing water to busy professionals which sent a shiver down the spine of every decent person in Britain.

Tom Logan, from the Institute for Studies, said: “We’ve banned smoking in pubs but we’ll stand idly by and let the BBC and the Chief Spiv lure impressionable children into a worthless, money-grubbing life full of corporate lies and marketing bullshit.

“We should have television programmes to see which teenager can have the most sex in one 24 hour period while expressing a torrent of hilariously stupid, ill-informed opinions about big serious subjects.

“We should have programmes to see who is the best at rolling joints, blowing smoke rings and making improvised cocktails from the contents of their parents drinks cabinet, a jug of Ribena and a pint of yoghurt.”

He added: “A culture that encourages 17 year-olds to try and impress Alan Sugar is a culture that needs to be cleansed with fire.”

Julian Cook, a part-time something or other from Finsbury Park, added: “When I was 17 I was in the middle of my transition phase from Strongbow to Foster’s and wanting to have sex with every single woman in the world.

“I was re-watching the bit where you find out why the gym teacher, played Sex and the City‘s Kim Cattrall, is nicknamed ‘Lassie’.

“I was not dressed up in a little suit and getting all nervous about presenting a fictional marketing strategy to the man who developed the Amstrad emailer.”