OLYMPIC organisers have pleaded with the public to buy tickets for events not based on bikinis or hotpants.

The 2012 website crashed within minutes of being launched as Britain’s men clamoured to apply for the various thinly-veiled excuses for jiggling.

Front-row seats for beach volleyball, rhythmic gymnastics and the warm-up area for the women’s high jump have been most in demand.

“I’ve always enjoyed myself vigorously when watching the games but to actually be there to witness the magnificent spectacle and be able to see every bead of sweat trickling down the….oh sweet Jesus Christ almighty.”

Organisers are desperately trying to raise interest in the more heavily-clothed events with the introduction of qualifying swimsuit rounds for judo, three-day eventing and women’s cricket.

Olympic fuhrer, Lord Coe, warned that without more flesh, tickets for events like fencing and archery will remain unsold unless local people are allowed to bring their own weapons and join in.

Coe added: “The Olympic ideal is to bring harmony between nations, but I don’t see why we can’t have loads of tight, hot arses bouncing up and down at the same time. And thighs.”

Meanwhile, ticket helpline operative Nikki Hollis is fielding up to 200 calls a day from furtive, grunting customers asking whether they are allowed to pay extra to take home the competitor’s towels.

She added: “Putting banknotes in an athlete’s waistband will get you thrown out of the stadium.”

Creeping sense of oblivion up 32% 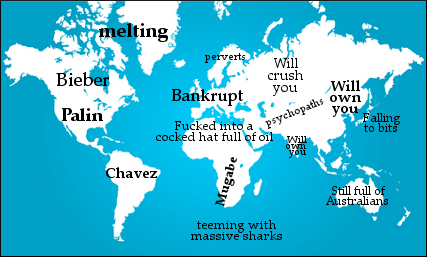 BRITAIN’S general feeling that all is lost has jumped by almost a third in the last quarter.

The Daily Mash Fucktometer, March 2011
The nation’s sense of oblivion has been driven to new highs by imminent nuclear meltdowns in the last country you would expect, the televised disintegration of North Africa and the looming threat of a Sarah Palin presidency.


Britain’s emergency reserves of meagre optimism have also been hammered by the seemingly unstoppable rise of both Justin Bieber and Hugo Chavez.

Meanwhile background factors persist, including having no money ever again, the broad sweep of central Asian psychosis and the uncertainty over what it will be like to be owned by an Indian or Chinese person.

Professor Henry Brubaker, of the Institute for Studies, said: “It’s not been the best three months for being able to ignore the sense that our world is collapsing around us as we hurtle headlong towards fiery doom.

“Nevertheless there is still fun to be had speculating whether you’ll be killed in an oil war, gunned down by Russian gangsters or consumed by a natural event that is just suddenly there.

“You could play it at home until you’re thrown into the street by man to whom you’ve been paying £6 million a year for bankrupting you.”

Tom Logan, an unemployed ambulance driver from Hatfield, said: “What a shame about Australia.”

Professor Brubaker added: “I would recommend people watch Deep Impact so as to get a sense of hope that, even when all seems lost, we can recover. Unfortunately I can’t, partly because that’s not going to happen, but mainly because Deep Impact is fucking rubbish.”