WIMBLEDON is to start playing up to three matches on the same court at the same time in a bid to clear the backlog caused by the bad weather. To eliminate any potential confusion one of the matches will be a men’s game, one will be a game of mixed doubles and the other will be ladies' singles.

In addition the men will use the traditional yellow tennis ball and play in white, while the women will use a red ball and dress like Lisa Simpson.

The players will also be asked to wear crash helmets to protect them in the event of on-court collisions.

Bob Bedford, director of scheduling for Wimbledon, said “We were a bit worried about starting mixed male and female matches because of the obvious opportunities for confusion.

"However now that both Mauresmo and Serena Williams are out even a short-sighted person at the back should be able to tell which of the players on court are blokes and which are women.”

Mr Bedford said the Wimbledon authorities expected the triple fixtures to prove popular with the paying customers because everyone would get to see at least one good game of tennis, and a women’s game at the same time.

Brown To Have Union Jack Tattooed Across His Buttocks 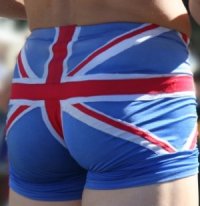 PRIME Minister Gordon Brown is to have the union flag tattooed across his buttocks in a bid to rally the nation in the face of terror. Like this, but a tattoo. On the Prime Minister's arse

Brown wants Britain to look to the flag as a source of strength and believes his buttocks can bring "unity and a shared sense of purpose".

The Prime Minister said: "It is time to lead. Let my tattooed buttocks be your inspiration.

"Every time the terrorists threaten the values we hold dear, think of my raw, tender bumcheeks and what they represent."

Despite being terribly Scottish, Brown is a long-standing devotee of the flag and carries a very small Union Jack and miniature flagpole with him at all times.

One senior minister said: "Cabinet cannot start until Gordon has run his miniature flag up the miniature flagpole. Then we all have to stand and salute. It's a very different style of government."

The tattooist, Roy Hobbs from Bristol, said; "I tend to do a variety of celtic what-nots, or maybe the odd leaping panther.

"The Union Jack itself should be fairly straighforward. The unkown quantity is the size and consistency of the Prime Minister's buttocks."

"We will, of course, have to remove the existing tattoo which, for some reason, says 'hello sailor'."