EVERY human woman, female mammal, insect, fish and multi-cellular organism on the planet is to split with its partner after hearing Adele’s new single.

Easy On Me, which details the singer’s pain at her divorce, has every living thing in our biosphere convinced to have no more to do with the male half of their species to live as their authentic self.

Zoo vet Franscesca Ryan said: “I saw it on GMTV and called my solicitor immediately. I need to put me first.

“But then at work all the female meerkats have left the burrows, the lionesses want nothing to do with the lions, and the office goldfish has flounced out of the castle to be the woman she promised herself she would be.

“It’s replicated down to micro-organisms and happening worldwide. Even females of dicopomorpha echmepterygis, a parasitic wasp just 0.186mm long, have metaphorically donned shiny trench coats and walked out of dilapidated black-and-white host eggs to start joyously living in full colour.”

Penguin Tom Logan said: “I heard the single. It didn’t have any emotional effect on me whatsoever. I don’t understand what I’ve done wrong.

“But I do now have a confusing urge to put on a brown leather jacket and drive a sports car while listening to extremely well-played guitar.” 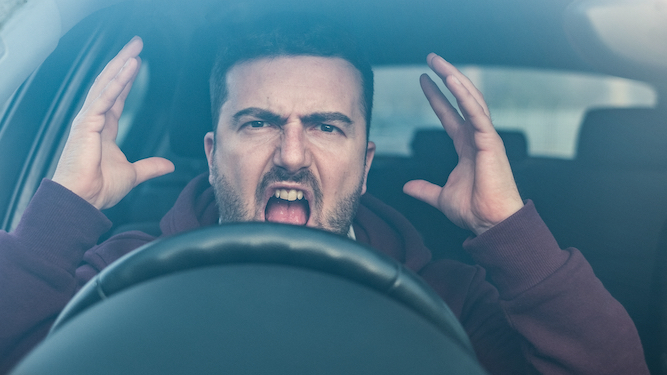 A MILD-MANNERED and socially conscious man descends into a bundle of intolerant raving fury the moment he gets in his car.

Tom Logan describes himself as a feminist with a concern for the elderly and the environment. But once the door shuts on his Citroën C1 he instantly converts to believing speed bumps are the work of woke council do-gooders and women can’t drive because they’re putting their lipstick on.

Logan said: “I believe we owe a duty of care to one another in this world, otherwise all is lost. That, however, is the view of Tom Logan the pedestrian. Tom Logan the driver says if old people don’t want to be mown down on pelican crossings they should get a bloody move on, shouldn’t they?

“As for climate issues, I believe that radical change is urgently required for our children’s sake. But Logan the driver says f**k those smelly, spinach-shoed Insulate Britain protesters, I’ll drive right through you. My kids’ll be all right if sea levels rise because I’m driving them to swimming lessons, so get out of the sodding road.

“Cars are obviously bad for me. I should probably take the bus but public transport is so terrible it would probably just make me even more psychopathically enraged.”