AN overeager office worker is treating Friday as if it is a normal working day and toiling away accordingly.

Carolyn Ryan has left colleagues confused by enthusiastically sending emails and attending meetings, even though it is a Friday so she could get away with doing f**k all.

Co-worker Helen Archer said: “I had to check I hadn’t lost track of the days when I saw Carolyn cracking on with her sales report for Q3. Everyone knows Friday is technically part of Saturday.

“She was the first person back in the office after lockdown so I guess I shouldn’t be surprised. It was the ultimate mega-doss and she couldn’t even get behind that.

“Doesn’t she know that there’s still a tacit agreement between bosses and workers that we can spend Fridays pissing about? There has to be something that makes coming to work worthwhile.”

Boss Emma Bradford said: “I miss the days when you could go for a two hour lunch on a Friday and neck three pints with nobody batting an eyelid. Now I have to make do with slyly sipping a can of Malibu and coke while I eat my sandwich.

“The received wisdom is that alcohol and work don’t mix. Unless you drive a combine harvester, that’s wrong.”

'No shortages at my Tesco': The moron's guide to cherry-picking evidence 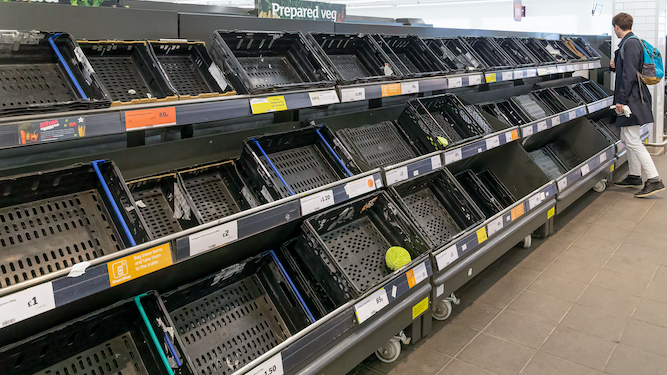 SUPPLY chain problems continue, but there’s no shortage of morons determined to prove they’re right. Here’s how to carefully pick your evidence…

My supermarket didn’t have empty shelves

Brexiters think this is an irrefutable argument, based on the mindbogglingly thick assumption that everyone’s experience is the same as theirs. Luckily it’s not, or we’d all be driving a white van while obsessing about the bastard French.

Shortages have some implausible other cause

If you don’t like the probable cause of shortages, eg. Brexit is making other problems worse, pull something out of your arse. The lack of apples in Sainsbury’s is due to unexpectedly high levels of scrumping this year. Probably.

A certain type of Remainer would like things to get very bad, even if it means having Cup A Soup for Christmas dinner. Although after five years of listening to Brexiters’ drivel, a nihilistic desire for self-harming revenge is probably a normal, healthy reaction.

The internet is a totally reliable source of information

Twitter provides photographic evidence of both shortages and an abundance of goods, if you’re too dense to grasp the concept of ‘not typical’. Pro-tip: anyone can put any picture on the internet. Some of those pictures of people about to be eaten by the same giant shark might not be real.

There are shortages in other places

True, including global shortages. But what’s the actual cause of ours? Don’t expect an answer because that would mean Brexiters doing some research rather than triumphantly saying everything’s fine because they’ve got the same problems in Yemen.

Christmas isn’t about having a particular type of turkey or must-have toys, according to commentator/troll Isabel Oakeshott. Leavers love this infuriating non-logic, which is like saying: ‘Sorry you lost your job, but at least you haven’t been horribly burned too.’