THE BBC has fired the first shot in the summer ratings war with a new series of the popular reality show Date My Cat.

Each week four potential suitors will compete for an all-expenses-paid date with the week's chosen cat and a cash prize of £200.

The contestants will go through a series of demanding tests including their knowledge of cats, the care and treatment of cats and the all important 'taste test' when they have to sample five varieties of cat food and then finish a whole bowl of their favourite.

The biggest challenge will come near the end of the show when each contestant must prove that they really do prefer cats to dogs.

Anyone found to be lying has to dress up as a cat and apologise to each member of the audience individually.

Previous winners have enjoyed spectacular dates such as chasing rats in a derelict petrol station, playing with a half-dead bird and just sitting and staring at nothing in particular for three and a half hours.

The show has fought its way back to popularity after one winner was discovered to be allergic to cats and spent the entire date gasping for breath in a near fatal asthma attack.

Date My Cat is the centrepiece of BBC2's Summer of Cats.

Other shows will include Most Haunted Cats, Simon Schama's 35-part series A History of the British Cat and a David Attenborough special Is You're Cat to Blame for Global Warming? 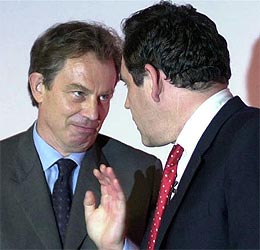 TONY Blair has announced the timetable for the run-up to the declaration of the date by which he will reveal the time of the announcement of the confirmation of his final split from his long-term companion Gordon Brown.

An emotional Blair appealed for privacy over the coming weeks saying the break-up was just "one of those things" and that no one person was to blame, apart from Brown who was "as everyone knows, psychologically flawed".

Blair said the pair had already made a start on dividing the CD collection, but he warned Brown that he was taking all the friends, telling the Chancellor to “back off”.

He said: "Bush was always my friend not Gordon’s, I’ve told everyone they have got to choose, and I know they will all choose me. So I am keeping Berlusconi and Cliff Richard as well.

"If he really wants he can have that guy who runs Canada and General Musharraf."

That departure timetable in full:

May 10: Tell everyone I am leaving, and that it was my choice to go. No, it was.

May 20: Rip up all Gordon’s letters, sobbing gently. How could he do this to me?

May 29: Remove address books from Number 10. Those are MY friends’ phone numbers.

May 30: Remove diary from Number 10. If he wants to meet MY friends let him try and make his own arrangements. They won’t see him, I know.

June 17: Tell George W. about Gordon’s “dark side” and what I went through. Oh yes I may be laughing loud and hearty, but deep inside I am blue.

June 21: Just a few days to go, need to make sure everything is right for a smooth handover to Gordon. “Accidentally” pour coffee into Number 10 computer. Ha, ha, ha.

June 25: Remember to put stinky prawns inside the curtain rail in the lounge and under the floorboards in the master bedroom.

June 26: Make speech saying I am leaving the country in a safe pair of hands. Tell friends that Gordon is insane.