GENIUS chimps who beat students in an intelligence test still spend most of their day throwing shit at each other, scientists confirmed last night.

Dr Wayne Hayes, director of chimps at the Monkey Institute, said he thought the memory challenge overstated the chimps’ intelligence as none had showed any humility in victory.

He said: “All they did was frantically scratch at each others privates and bare their arses at their poor opponents. I don't call that clever, do you?”

He added: “The main thing they all seem to remember very well indeed is my face, what time I come to feed them, and where it was they left a really smelly, sticky piece of chimp shit.

“They are also very good at remembering that my assistant Rebecca does not like being chased around a cage by a gang of hairy arses with bright pink erections.”

Dr Hayes cautioned against attributing too much significance to the chimps’ success in the tests pointing out they had only defeated a group of first-year university undergraduates.

“Out of that lot, I know who I'd choose to go to Starbucks for me,” he said.

One other key test of memory devised by Dr Hayes involved the offer of free tickets to see the Spice Girls on their reunion tour.

He added: “The students accepted immediately, but every single chimp said ‘no thanks’ on the grounds they remembered the video for Viva Forever.” 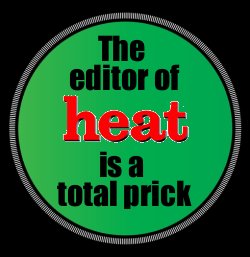 IT'S our most exciting reader giveaway ever!

In a special festive treat the Daily Mash is giving every reader a free sticker declaring that the editor of Heat magazine is a total prick!

First print out the sticker, then cut carefully around the edge with a pair of scissors. Next, apply some Prit-Stick to the back, making sure you don't miss bits.

Now you're ready to wear it proudly on your coat or, if you're feeling crazy, why not slap it on the front of your favourite hat?

And if you're feeling up to it, you could print out dozens of stickers, go down to your local newsagent and paste them over every copy of Heat magazine you can find.

Next week's free sticker: 'The Editors of OK, Hello, Love It, Now, Star, Reveal and Closer Bathe in Their Own Shit'