Power Of Thought Fails To Free Monkey From Terrifying Laboratory

A MONKEY has failed in its bid to escape from a laboratory using nothing but the power of thought.

Ian, a four year-old capuchin, attempted the telekinetic feat after using his thoughts to operate a robotic arm and feed himself a banana.

He said: "In case you were wondering – yes, having all those pointy electrodes rammed into your brain does hurt like a bastard.

"If it didn't, then why the fuck am I the one wearing the electric helmet?"

Anyway – after my excruciatingly painful success with the banana, my next thought was 'get this bloody thing off my head and unlock the door to the laboratory'. Thus far, no joy."

Ian added: "Oh and by the way, I'm not a huge fan of bananas – I was just absolutely starving.

"I actually prefer an oatcake with a wee bit of Cambozola. But it was nice of you to make that assumption. Racists."

Ian's banana eating feat has been hailed as a crucial step towards turning the special effects of Star Wars into reality.

Professor Henry Brubaker, of the Institute for Studies, said: "We're slowly getting to grips with the Force, but our light sabre is still a bit pathetic.

"It makes a great noise but it can barely cut through porridge." 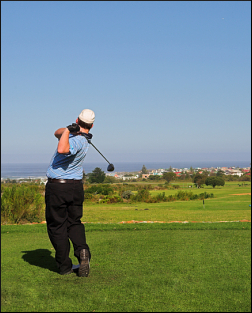 STATINS are a wonder drug which allow doctors to spend an extra three afternoons a week on the golf course, the British Medical Association said last night.

Welcoming the decision to approve statins for 98% of all recognised medical conditions, the association predicted a noticeable improvement in tee to green performance over the next year.

A BMA spokesman said: "The five iron is a notoriously difficult club to master and too many doctors are still laying up short with a seven and then making an arse of their chip shot.

"It can ruin an otherwise decent round – meanwhile the average American doctor is carding in the mid 70s, week in, week out."

Statins were developed in the early 1980s as a fast and efficient way of clearing blocked drains. They are now used to treat a range of conditions including TB, cat flu and being British.

The spokesman added: "We're not making any promises about our putting – even the pros can go through bad patches. Look at Monty for God's sake."

Julian Cook, a GP from Peterborough, said: "Our patients come in with a big plastic jug and just help themselves from the wheelbarrow full of statins at the front door."

He added: "It's very handy because I'm club captain this year, so I only have time to look at the unusual stuff.

"But if someone does come in with a huge growth on the side of their head or an eye hanging out, I tend to put them on statins for a fortnight and then reassess."