PRINCE Philip has answered critics of his participation in a fox hunt by eating two cats and a badger. Prince Philip was fond of badgers at Gordonstoun

A Palace spokesman said: "The Prince is a traditional man who believes in the principle of an eye for an eye.

"When the protester decided to eat a dog, the Prince felt the most appropriate response was to eat two cats.

"Pound for pound, that's about the same weight as a Corgi."

The cats, volunteered by members of the Royal Household, were served as four rounds of toasted sandwiches.

The Prince said the cats were delicious and ordered his eldest son to begin marketing an organic version.

The British Constitution guarantees Prince Philip's right, as the Queen's Consort, to eat whatever he wants. In recent years he has developed a taste for stoat, albatross and canary.

The Palace spokesman added: "There's nothing unusual about the badger. He's been eating those since he was at Gordonstoun."

God Tells Britney To Sod Off 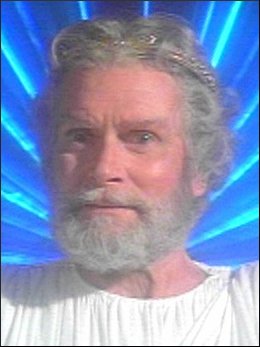 GOD last night said he would pretend to be out after troubled singer Britney Spears revealed she “could not wait to meet Him”. Strangely enough, God looks just like Laurence Olivier in 'Clash of the Titans'

The Creator of the Universe said he would hide behind the sofa and get St Peter to answer if Spears called, describing the pop star as an “annoying cow” and “not one of my better efforts”.

The Supreme Being said he was sick of the Toxic star invoking his name and said that if Britney was so keen on Him and all his ways she should stop flashing her privates in public and start dressing like a nun, but not in a nasty way like Christian Aguilera.

God said: “I read on Britney’s blog that she makes one mistake and it is all over the television. Well how many times has she been divorced, and how often does she go out without her knickers on? It’s more than fucking once for both, I can tell you.

“But every time I let off a small volcano or unleash a bit of famine the papers and the TV are full of dreadful people going on for months saying either that I don’t exist or that I am cruel and unnatural. Now that’s what I call media harassment.

“Why do these cocking celebrities think they can just call on me whenever they want, usually only when it’s all going tits up? I never invited her up here, I’ve never spoken to the damned girl, I am not even that interested in pop music, although I do like a bit of reggae.”

God said he realised his reluctance to agree to an early entry into Heaven for Spears would disappoint many of his followers on Earth. “I’ve done a lot for humanity,” he said. “I sacrificed my only Son to save you, but this is just asking too much.”