TONY Blair and the Libyan dictator Colonel Gaddafi yesterday reached an historic agreement over the fact that Alex Salmond is a dick.

In his farewell tour of Africa, Blair urged Gaddaffi to accept the UK government position that Salmond was a, "tosspot of the first order, who is not even worth the price of a phone call".

Blair will now travel to Sierra Leone and South Africa to reinforce the Government's message that Salmond is an arsehole.

In a speech at the presidential palace in Tripoli, Blair told Gaddaffi: "Admittedly you and I have had our problems in the past, what with you being an insane terrorist.

"Your agents may have wrought carnage and mayhem across Europe, but at least you never put up a candidate in Govan."

He added: "I know the Libyan people will agree with me when I say that Alex Salmond is a dick. He dresses like a supermarket manager and smells of onion bhajis."

Blair arrives in Sierra Leone today where he will dedicate the Allan Wilson Memorial Rangers Supporters Club in honour of the junior Labour minister who lost his seat to the SNP in Cunninghame North.

Next week the outgoing prime minister will attend the G8 Summit in Germany where he hopes to build support for his Alex Samond Is A Dick Foundation. 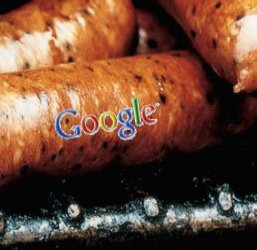 GOOGLE is to launch its own brand of sausages after it emerged that the most frequently asked question by internet users is "what sausage shall I eat today?"

The Google Banger™ will be launched globally next month and has been described by chief executive Eric Schmidt as the next stage in company's strategy to meet every conceivable human desire.

He added "We don’t just want to provide people with online answers, we want to make them eat the answers too."

Schmidt said he envisaged a day when Google would not only provide sauages, but "ham, bacon, lamb shanks and pornography. Lots and lots of pornography".

The Google Banger™ will be launched at the next Consumer Electronics Show in Las Vegas and is expected to start a stampede of product launches from high-tech rivals.

Microsoft will soon unveil its own-brand 'straight from the tub' ice cream, Yahoo is working on an all-in-one shampoo and conditioner, while Apple user internet forums are already buzzing with rumours about the company’s forthcoming iPear.

But Shami Chakrabati, director of the civil rights lobby group Liberty, said: "Are we really going to let some giant American corporation tell us the type of sausage we should consume? Have you ever tried a Corn Dog? Well have you?"