MIRACLE shark Lorraine Chelsy is a 'skanky liar' who claimed she had a virgin birth to stop her mum going mad at her for getting pregnant, say her friends.

Lorraine has attracted the attention of scientists and senior figures in the Catholic Church this week after claiming her shark pup arrived without sexual relations.

However, her friends say that Lorraine made the whole thing up because she was terrified her strict religious mother would throw her out for being an unmarried mum.

One said: "Lorraine is so far from being a virgin it’s untrue. She may not know who the father is, but that’s only because it could be one of many. She’s nothing but a little tart."

When confronted, Lorraine’s mum Betty Chelsy angrily denied the claims saying the other girl sharks were "just jealous" of the attention.

Meanwhile, a Vatican spokesman confirmed that the Catholic Church was investigating the virgin birth story.

He said: "We have not had one of these confirmed for a couple of thousand years now and let me tell you they are great for business when you can stand them up.

"We could get a whole new marketing campaign out of this one if it’s true, and at the very least a new shrine linked to an aquatic theme park, hotel and championship golf course. It could be a real money spinner." 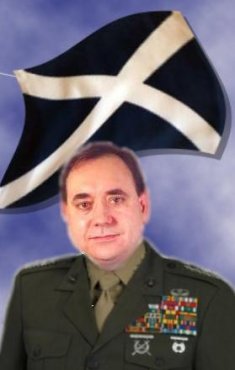 SCOTLAND is a nation of demented, blood-thirsty warmongers, straining to mount a full-scale assault on Holland, according to a Daily Mash readers' poll.

First Minister Alex Salmond said he was delighted that 45% of Scots have given their backing to his campaign against the Dutch.

"Scots have so many reasons to back my war on Holland," he said. "Whether it's the way these people degrade tulips on a daily basis, their contempt for conventional sex, or Jonny Rep's 30-yard screamer against us in the '78 World Cup which brought us hurtling back to earth after Archie Gemmill's wonder-goal."

Scotland's love of carnage was underlined by the Daily Mash poll which showed 12% believe the nation should go to war on terriers, while almost 10% want a war on rugs.

But Salmond's plans for a naval assault have been dealt a devastating blow after the Dutch arson attack on the Cutty Sark. Salmond now hopes to use HMS Discovery, pending approval from Dundee City Council.

Last week Salmond destroyed Chapelcross nuclear power station as a warning to the Dutch, announcing: "If we can do this to Dumfriesshire, imagine what we could to the miniature village of Madurodam."

Dirk Van Poomf, spokesman for the Dutch consulate, said: "Your First Minister is a psychopath who is leading you on a road to devastation. We pleaded with him not to blow up Chapelcross.

"We are strengthening our enormous dykes and perfecting our doomsday machine. You have been warned."