If you grew up in a coastal town you’ve probably already gone toe-to-toe with a seagull and lost. They think nothing of swooping down and stealing your chips, so it’s not a huge leap of the imagination to picture them sending you home in an ambulance. Plus they’re hard as nails and you don’t go to the gym.

Geese are nature’s largest waterfowl with a wingspan of up to 1.8 metres, meaning they can safely smack you upside the head without fear of you landing a punch. They can also probably whip you with their necks and their tongues have got teeth on them. Seriously, Google it, it’s f**ked up.

Everyone knows a swan can break your arm with their wing, but their beaks have enough dexterity to wield a switchblade which is what you should be more worried about. And if you’re stupid enough to fight back it’s only a matter of time until the Queen gets involved and you’re executed for crimes against the monarchy.

Pigeons are not only tough little streetwise thugs who thrive in cities, they also have no qualms about eating each other, so who knows what they could do to you? They’ve probably got a sharpened screwdriver hidden under their feathers.

These long-legged bastards could easily kick the shit out of people if they felt like it, but they’re usually too busy hunting fish and worms which are only slightly easier prey than you. Also have you seen the length of their beaks? They’re like flying spears, you wouldn’t stand a f**king chance.

At 16cm tall the common chaffinch might not seem like much of a threat, but you’re not exactly built like a brick shithouse and you get exhausted just running for the bus. Plus it has the added advantage of being able to fly which you can’t even do slightly, so my money’s on the bird. 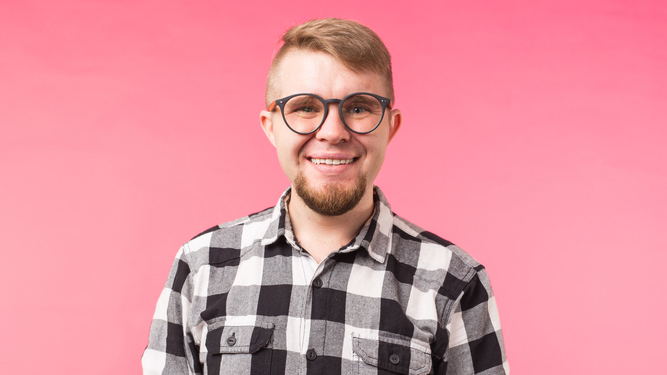 Where did you sit on the school bus?

A) At the back in the middle, surrounded by hordes of clamouring admirers. Even the driver thought I was the shit.

B) Right at the front so it was harder for all of the twats at the back to throw things at me.

When you were growing up you read…

A ) MATCH! magazine before moving on to lads’ mags, which was a culturally acceptable thing to do at the time.

B) Back issues of 2000AD sourced from my local Forbidden Planet. Although I mainly flicked through them to ogle Judge Anderson.

A) My entire personality was built around my pair of crisp white Nike Dunks, and in many ways it still is.

B) My trusty anorak and tank tops chosen by my mum.

The first album you ever bought was:

A) Appetite for Destruction by Guns N’ Roses, which became the soundtrack to many a make-out session.

B) A Doctor Who sound effects compilation album. My favourite track was Gallifreyan Staser Gun (3 Blasts).

What car did you have as a teenager?

A) A white Ford Escort XR3i. I’d drive around for hours just being unbelievably cool.

B) My parents’ Austin Allegro. I’d sit in the passenger seat while they drove me to Blake’s 7 conventions.

Mostly As: As a slave to popular tastes you were cool by default, even though it sounds as if you were, and still are, a massive wanker. Congratulations, sort of.

Mostly Bs: You were about as far from being cool as it was possible to get. Although if you were young today you would probably be celebrated for being a trail-blazing iconoclast. Bad luck.