I’m just doodling my wish list for EU reform. So far I’ve managed: universal access to quality cardigans; the criminalisation of Philip Schofield and more money for the squirrels. But now I’m drawing a blank. Any ideas?

Everyone knows if you get granted three wishes you ensure you ask for unlimited wishes. Then you ask for school to be abolished, for Elsa from Frozen to be your best friend, and for everything in the ENTIRE world to be made out of M&Ms. 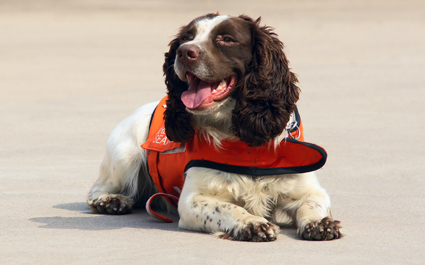 A SNIFFER dog has demanded new powers to seize sausages, biscuits and other snack foods.

Spaniel Tom Logan, whose main role is to find drugs, believes that meat-based products should be added to the list of things that must be removed from travellers’ luggage for further examination.

Logan said: “People don’t realise the dangers caused by tasty cured meats. For example, you could use one of those big Chorizo sausages as an offensive weapon.

“Really that should be handed over to me so that I can take them into the corner of a room and examine them with my mouth while growling at anyone who gets too close.”

Logan added that he had really gone off cocaine lately: “When I find a big bag of the stuff they always give me a line as a treat.