Today is a big day for me. If those evil Tories get in again my wife and family are in huge trouble, especially my oldest son who is disabled and my dear old granny, who has dementia and can’t get about like she used to. Let’s face it, if that Blue Battleaxe is elected we’ll have to flee the country or we can all start digging our own graves. My wife says I am being overly dramatic again, is she right?

I love General Election Day. School is closed – yippie! – and all the adults are too busy questioning each other’s values and posting socialist memes on Facebook in order to offend their racist relatives from Peterborough to notice what their kids are doing. And what will we be doing? We’ll be taking careful notes about who we can blame in thirty years time when we’re all eating gruel and wearing hessian sacks in the workhouse and paying £1000 for one paracetamol. And also we’ll be eating Wotsits and watching Justin Bieber videos on the iPad. 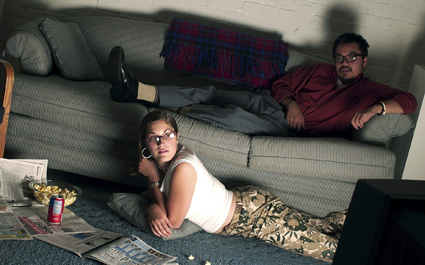 A COUPLE are staying up all night to witness the live televised death of their fleeting interest in politics.

While usually politically apathetic, the Logans have been inspired to become part of a growing movement of people who will have their hopes spectacularly and brutally dashed.

Tom Logan said: “The best time to suffer a huge disappointment is five in the morning after drinking nine cans of Apple Tango to stay awake.

“The growing wave of nausea through sleep deprivation will really add to the experience and hopefully the painful next day at work will remind me never to vote again.”

The Logans have taken the liberty of ordering 100 red balloons which can float around the house in states of deflation for days afterwards providing an apt metaphor for their defeat and they plan to use their misery to educate their young son, Tim Logan.

Clare Logan said: “It’s the first General Election that Tim has been old enough to understand, so I want to let him stay up too so he can experience his first spirit-crushing disappointment.