Ask Holly: I have a recurring dream about Mary Berry

I keep having a recurring dream which I need help to interpret. It always begins with me slowly entering the Bake Off tent in the middle of the night. I am naked, and as I gingerly part the huge flaps of the entrance, I come across Mary Berry. She doesn’t say a word, she is too focused on vigorously massaging a massive panettone with her skilful, arthritic hands. I look beyond her and there are Sue and Mel, on their knees. Sue is hungrily guzzling an enormous French stick and Mel is nibbling on a pair of voluminous crusty cobs. No-one speaks, all I hear is the squelch of the panettone and loads of noisy slurping sounds.

So that’s basically it but I have no idea what it all means. Am I going to come into money or something?

As the great philosopher and academic Gabrielle once said, dreams can come true. But she must have been talking nonsense because if that were true, I’d be Taylor Swift and I would be married to Harry Styles and Nick Grimshaw would be our butler, and we’d have used our money to buy my school and terminate classes and turn it into a massive soft play area with free sweets for everyone and all the teachers would be banished to the PE cupboard and never allowed out, even to go to the toilet. 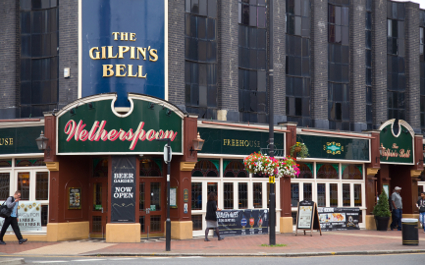 MOST Wetherspoon pubs are named after local luminaries that never existed, it has emerged.

Landlords are told to invent characters like Arnold Haspler, supposedly the first man to fly upside-down across the Bristol channel, and Ernest Gibbo ‘the inventor of the shoe horn’ and name their pubs after them to create a veneer of historical respectability.

Bill McKay, manager of the Colin Appleby, said: “I’m in Reading, nobody important comes from Reading.

“So I named the boozer after a kid I went to school with, then said that he was the first man in Europe to put a tablecloth on the ground for picnics.

“The full story’s above the urinals. Nobody ever reads it.”

Other fraudulently-named hostelries include Norwich’s Chuck Torrance, supposedly named after the man who discovered that holding in flatulence can be fatal, and Newcastle’s Wayne Hayes named after ‘the UK’s first female prime minister’.

A Wetherspoon spokesman said: “We just thought we were giving people a little bit more pride in where they’re from. These fictional historical luminaries are like Father Christmas – a myth designed to bring a little cheer into an otherwise bleak environment.”