Ask Holly: I have no previous experience in expressing genuine emotion

I owe some people an apology, but I have no previous experience in expressing genuine emotion. How do I do that thing where you look all remorseful and a solitary tear rolls slowly down your face? I think that would be effective. Also, do you think maybe a cute personalised apology card from moonpig.com might get everyone off my back?

You just need practice – you need to start doing stupid stuff on a regular basis and that way you become good at apologising. I think that’s why my dad always makes a point of forgetting his wedding anniversary, so that when he does something REALLY daft, like getting drunk and doing a wee in the wardrobe, he is fully rehearsed in the art of expressing remorse. 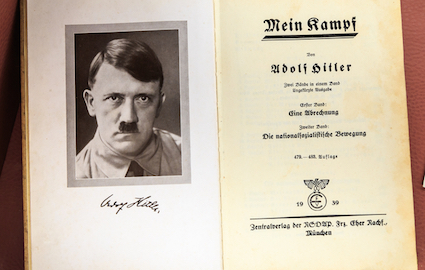 A NEW edition of Mein Kampf is being updated for a modern, multicultural audience.

Adolf Hitler’s infamous work is being revised to appeal to liberal-minded contemporary readers with no interest in Nazi ideology or insane conspiracy theories about Jews.

Publisher Donna Sheridan said: “Sometimes books need updating because times change and things that used to be acceptable become outdated or offensive. Mein Kampf is a bit like Noddy in that respect.

“We’re removing all the racism and world domination stuff and replacing them with positive messages about tolerance, inclusivity and getting along with each other.

“So when Hitler writes something like ‘Man’s destiny is forged in the blood of lesser races’, we’ve changed that to ‘It’s good to have a destiny, but remember to respect other people’s destinies too’.”

She added: “I got a ghostwriter to add a chapter where Hitler goes to a gay club by mistake. At first he’s really uncomfortable, but in the end he has a good time. So it’s funny, but with a point.

“I’m sure Hitler would approve of the changes. There’s just no way 600 pages of impenetrable racist pseudo-philosophy would have stood a chance in the Christmas bestseller list.”