Ask Holly: I've found a new source of propaganda on the Dave channel

So, apparently it’s not cool to compare the EU to Hitler. But that doesn’t matter anymore, because I’ve found a new source of propaganda, on the Dave channel. It is a historical documentary about wartime France that captures the very essence of Europe. The peasant-minded French are led by Rene, a lecherous, bumbling cafe owner, sneaking around behind the backs of the fat, idiotic German soldiers, and a really sexy one called Helga. And in the middle of it, trying to escape, are the poor, upstanding British, who are roundly mocked by all sides for their silly accents. That’s about it. Should I incorporate this into the Brexit campaign?

Back in 1992, when a really dull man called John Major was PM, he was kidnapped, taken to the Netherlands and locked in a room with loads of weird Dutch and random people from Luxembourg who said that he had to sign a treaty saying everything in the entire world would be European, including the money, hairstyles and pop music. And John Major was weak, so he nearly let them bully him, but at the last minute he said no, and that they couldn’t have all that stuff, and then they said okay, but instead you must have Brussels sprouts and Eurovision. And so history was made. A generation later and we never win Eurovision and sprouts are totally rank, so as far as I can see we are better off out.

Family with mountain bikes on car secretly going to multiplex 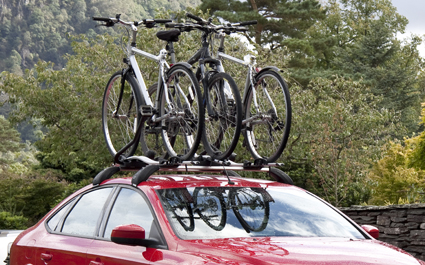 A FAMILY that appears ready for an outdoor weekend is actually going to spend it at an out-of-town entertainment complex, it has been confirmed.

Although the Logan family’s Explorer 4000 bike rack and costly cycle equipment suggest a trip to the Lake District, their actual destination is the Cinevision MegaPlex in Stoke.

Dad Tom Logan said: “I got the bikes a year ago but when we went to the countryside it was boring, damp and smelled of animal dung. So now we just drive around with them on the roof.

“When we arrive at the leisure complex on Friday evening we’ll probably be tired from the 20-minute drive, so we’ll just unpack a few things and have a night-time walk to the on-site Wetherspoon’s.

“There isn’t much wildlife there but let’s face it, with a budget of $250 million the latest Marvel will shit on seeing a kingfisher.”