Ask Holly: May needs to stay on top of her ironing pile

I know Theresa May is busy signing Article 50 today but I can’t help but wonder if she managed to have her hair done and maybe a lovely manicure too. She needs to be careful with all this Brexit business that she doesn’t let the washing up get out of hand and keeps on top of the ironing pile, because she can’t have Mr May going about in creased shirts. I do worry about her, I really do.

My granny is lovely but she’s losing it a little bit. She says that ladies didn’t used to be able to do manly stuff like vote in elections or go out to work or drive buses and drink out of tankards but then one day they all went mental and threw themselves in front of horses and chained themselves to railings and burned their bras and after that the men decided to let them be in charge just for an easy life. But my granny also thinks Daniel O’Donnell is sexy so she is clearly off her head.

Attempt to befriend office loner reveals why he is a loner 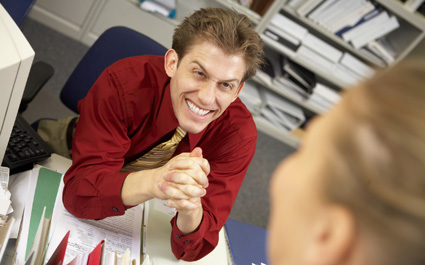 A GOOD-HEARTED attempted to befriend a widely ignored co-worker has backfired, it has emerged.

Administrator Nikki Hollis had assumed Martin Bishop was socially isolated due to workplace cliques or shyness, but soon discovered it is because he is a creepy twat.

Hollis said: “When I invited Martin to lunch he immediately started hassling me to invite Lorna, who neither of us really know and which would have been weird.

“In the canteen it turned out his idea of conversation is telling you the plots of obscure horror films. Apparently I should see one called Blood Martyrs because a man gets his tendons ripped out with fish hooks.

“I changed the topic to harmless office chat, which Martin took as a cue to speculate about which female colleagues were ‘rightslags’. Also I have never seen an adult pick their nose while eating.

“He believes Britain is run by ‘high-ranking gays’ and we need a strong leader like Putin. I’m just praying it was a joke when he said he’d get my address off the internet and bring his Samurai armour to show me.”

Bishop said: “Since we’re best friends now I left some of my favourite SS history books on her desk for her to borrow.”