Ask Holly: Should I have her sacked, stop her benefits or both?

I’ve had a thing going on with a young honey in my local Asda. She’s quite sexy in a working class sort of way, and her lime green fleece really brings out her eyes. I always make a bee-line for her till when I go shopping, relishing the opportunity to give her a smouldering look down my nose as she is ringing my items through the till like my own personal lady-slave. But now our clandestine romance is ruined. My card was declined in error and my beloved serving wench witnessed the whole thing. She must be sniggering about the whole thing with her checkout cronies. Should I have her sacked or stop her benefits or both?

Embarrassment caused by getting your card declined pales into insignificance when compared to the immediate and irreversible social death that occurs when you invite your friends to a sleepover on the night that your dad drinks six Magners and tries to show you all how to dance to the Kaiser Chiefs. The only option is to never leave the house ever again. 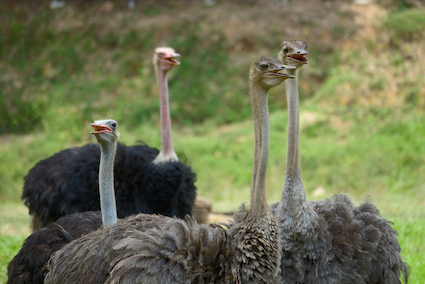 Pearson won plaudits for keeping Leicester in the Premier League last season, but continually insisted that he was being undermined from within by a hostile ostrich faction.

The club parted company with Pearson on Tuesday, in a move the 51-year old insisted “had ostrich prints all over it.”

Pearson said: “All year, we’ve been thwarted by their sinister, feathery intrigues. We’ve had to play every match against eleven men, plus the referee, plus a malevolent group of large, flightless birds.”

Pearson added that he had proof that an ostrich, or team of ostriches, had pulled the strings to get him fired, claiming that only the Struthio camelus was able to manipulate the Leicester board into axing him thanks to its natural avian cunning.

Wayne Hayes, an ostrich, said: “Nigel Pearson was sacked because he fought with the owners, insulted fans, and constantly made ludicrous allegations about Machiavellian ostriches.

“His well-publicised love of exotic eggs, ostrich leather shoes, and black and white feather dusters had nothing whatsoever to do with it.”