I was in the library when I was disturbed by a group of mothers and babies who were loudly singing nursery rhymes and doing inane actions. At one point, they were proclaiming ‘if you’re happy and you know it clap, your hands’ and all the little bastards started clapping. At that point I simply had to intervene and remind them in a stern tone that a library is a place for silence and this is the way it has always been and that they must show some respect. Is it just me or has the world gone to pot?

You’d make a good teacher, because they are also obsessed by rules and love shouting at people. You need to be careful though, because your pompous authoritarian ways make you a prime candidate for ridicule. As soon as your back is turned someone will be quietly fashioning an anatomically correct willy out of blue tack to stick on your chair when you are not looking and if you were wondering why people snigger when you enter the room, you might also want to check your back for Post-It notes with similarly graphic representations of the male genitalia.

Restaurant couple clearly on a voucher 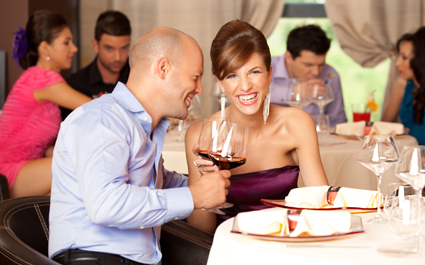 A COMMON-LOOKING couple in a fancy restaurant were only there because of an internet voucher, according to fellow diners.

The overdressed pair were disconcertingly excitable because of underlying nervousness, according to regular patrons of Rovelli’s in Bloomsbury.

Carolyn Ryan, a corporate consultant, said: “Everything about them screamed ‘50% off’.

“They were talking in broad estuary accents, switching to ridiculous pseudo-posh tones when the waiter came to take their order.

“My suspicions were confirmed when they cut the bread rolls with a butter knife.”

Solicitor Denys Finch Hatton said: “If it wasn’t for certain websites offering a two-for-one deal on the Wagyu porterhouse, I would never have to look at people like that except when they are fixing my boiler or driving me in a taxi.

“Our entire societal infrastructure is under threat from coupons.”

Restaurant manager Emma Bradford said: “We’re keen to encourage new customers to Rovelli’s, because nothing says ‘welcome’ like the thinly-veiled hostility of people who have paid full price for a steak.”

After the couple left a tip based on the cost of their voucher rather than the non-discounted bill, Bradford added that they were subhuman scum who should be chased into the sea.