Dear Holly: I've got an uncontrollable hatred of badgers

I’ve got an uncontrollably deep hatred of badgers. I don’t know why, but something about those furry woodland bastards really rubs me up the wrong way. Maybe it’s the sight of their angry weasel faces peaking out of shrubbery or their incessant digging or the fact they’re all called Brock; whatever it is I want them all to die a long and painful death and then be made into a fabulous winter shrug for me to wear at Balmoral. Basically, this badger-hatred is consuming me and I can no longer keep a lid on it. Can you assist before I do something I regret?

It sounds like you are a perfect candidate for looking after our class guinea pig, Winston Pettigrew. He’s called that after our teacher’s first love, who was from Nuneaton and who was possibly also a small rodent, we’re not sure. Winston Pettigrew is really horrible. He does tiny poos all over your school jumper and he often attacks people and once he nearly bit off the nose of a little girl called Abigail who tried to plait his hair. Don’t worry though, our teacher saved Winston from being destroyed by convincing the authorities that she would rehabilitate him and use him for animal therapy. Now, whenever someone misbehaves in class they get threatened with the guinea pig, because being attacked by a small animal is apparently a highly formative experience.

Men’s Health magazine finally puts a gorilla on the cover 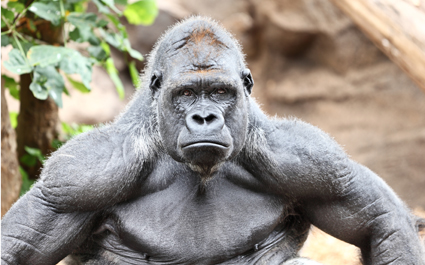 Akoo said: “Akoo do pull ups from the big tree, three sets of twenty. This good for bicep and tricep, make big.

“After this, press ups for chest, many as Akoo can manage.”

In the cover feature, Akoo explains that he stays fit to defend his community from hunters and also because it gives him more confidence in meetings.

However Akoo is not concerned about having a six-pack: “In jungle big belly is okay, upper body main priority.