'I'm like Famke Janssen from X-Men, but slightly more haggard'

Dear Holly,
I keep having these crazy dreams where it’s the future and I’ve got superpowers. As well as X-Ray vision and supersonic hearing, I’m also telepathic. I’m like Famke Janssen from that X-Men film but slightly more haggard. Anyway, I become omniscient ruler of the universe and things are great until the end when I have a threesome with David Cameron and Erich Mielke. Do you think I should lay off the cheese?
Theresa May
Westminster
Dear Theresa,
Sometimes it’s better not to know what people are saying about you behind your back, because the chances are it’s not very nice. That’s why, if you are a teacher, and you intercept an illicit note being passed around you should just toss it away and NEVER go back to the bin to read it when the class are dismissed because then you will discover that you look like Rolf Harris, your breath smells of bell-ends and you are having a lesbian affair with Mrs Rigby.
Hope that helps!
Holly

Concept of numbers explained to Poyet 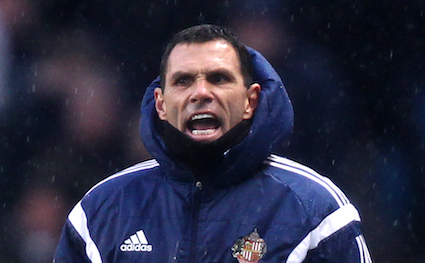 SUNDERLAND manager Gustavo Poyet has learned the meaning of numbers like 32, three and a half, and 80,000, one day too late.

Club officials explained the abstract mathematical objects after Poyet agreed to pay Jermain Defoe 14 million pounds until 2018, figures that Poyet came up with because he liked how they felt when he said them.

A Sunderland spokesman said: “Gus could drop numbers into conversation like he knew what they meant, but to him they were just meaningless floating signifiers. He’s like a human fruit machine.”

“With hindsight, we should have guessed he was winging it when I asked him how many sugars he wanted and he said ‘nine million’.”

Poyet welcomed his new-found understanding of integers, fractions, and basic adding up.

He said: “I now know the meaning of numbers like one, which is the number of league goals Jermain scored last season, and 32, which is Jermain’s age in years, and 600, which is how many pounds I once paid for a Twix.”

There is still a possibility that the deal may fall through when the concept of Sunderland is explained to Jermain Defoe.