Is this the baby blues you hear about?

Ever since my son was born recently, I’ve been struggling a bit. Yesterday I found myself standing at the kitchen sink weeping, looking out at the deserted garden as milk dripped from my nipples. Is this the baby blues you hear about?

Whatever the problem is, you need to give yourself a slap and step up to the plate, because you’re a dad now and you have things to do. Firstly, you need to sort out your CD collection and ensure you’ve stocked up on Santana, The Mavericks, and Michael Buble (for the ladies). Then you must revamp your wardrobe, ensuring you have an adequate supply of slate blue corduroy trousers and plenty of uninspiring fleece-based attire for going to B & Q in at the weekends. Now just go a bit bald and congratulations, you are no longer a man but a middle-aged paternal idiot like you get in TV adverts for fast food and household products. 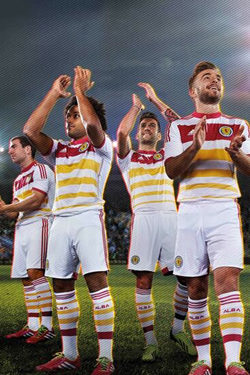 SCOTLAND’S new away kit represents the country’s history of producing delicate indie music for manchildren, according to the SFA. They’re a team but also lonely

The strip was launched on Wednesday to a fanfare of jangly guitars and a maudlin rendition of Lloyd, Im Ready To Be Heartbroken by Camera Obscura.

As well as a pink and yellow hooped shirt and socks, Scottish players will also be issued with an anorak, a pair of thick-rimmed glasses held together with Sellotape, and a dream journal.

An SFA spokesman said: From The Pastels to BMX Bandits to Belle & Sebastian, Scotland has long been a global leader in wistful disappointment, thanks to our natural abundance of sexless, pasty-faced introverts.

This kit stands for being obsessed with a girl who doesnt know you exist, walking through the rain feeling melancholy but strangely uplifted, and writing excruciating love poetry well into your twenties.

Its just what youd expect from the nation that gave the world Teenage Fanclub, Dogs Die In Hot Cars, and Pat Nevin.

The shirt, available in all sizes from S to XXXS, is made from high-tech microfibres that absorb, reflect and magnify the wearers crippling self-doubt.

It should ideally be viewed in Kelvingrove Park in the early autumn sunshine, but kit manufacturer Adidas has reassured fans that it can also be enjoyed through the viewfinder of a Super 8 camera.